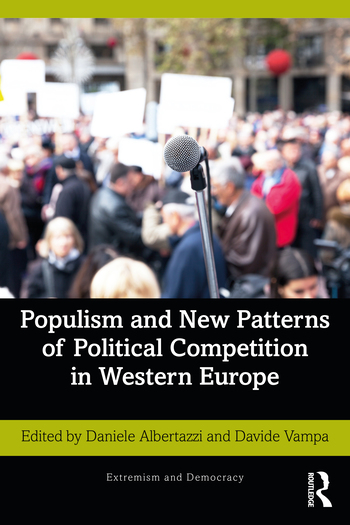 The purpose of the book is described in the following terms:

This book analyses how party competition has adjusted to the success of populism in Western Europe, whether this is non-populists dealing with their populist competitors, or populists interacting with each other. The volume focuses on Western Europe in the period 2007–2018 and considers both right-wing and left-wing populist parties. It critically assesses the concept and rise of populism, and includes case studies on Austria, France, Germany, the Netherlands, Switzerland, Denmark, Finland, the United Kingdom, Greece, and Italy. The authors apply an original typology of party strategic responses to political competitors, which allows them to map interactions between populist and non-populist parties in different countries. They also assess the links between ideology and policy, the goals of different populist parties, and how achieving power affects these parties. The volume provides important lessons for the study of political competition, particularly in the aftermath of a crisis and, as such, its framework can inform future research in the post-Covid-19 era. This wide-ranging study will appeal to students and scholars of political science interested in populism and political competition; and will appeal to policy makers and politicians from across the political spectrum.

You can order a copy here.