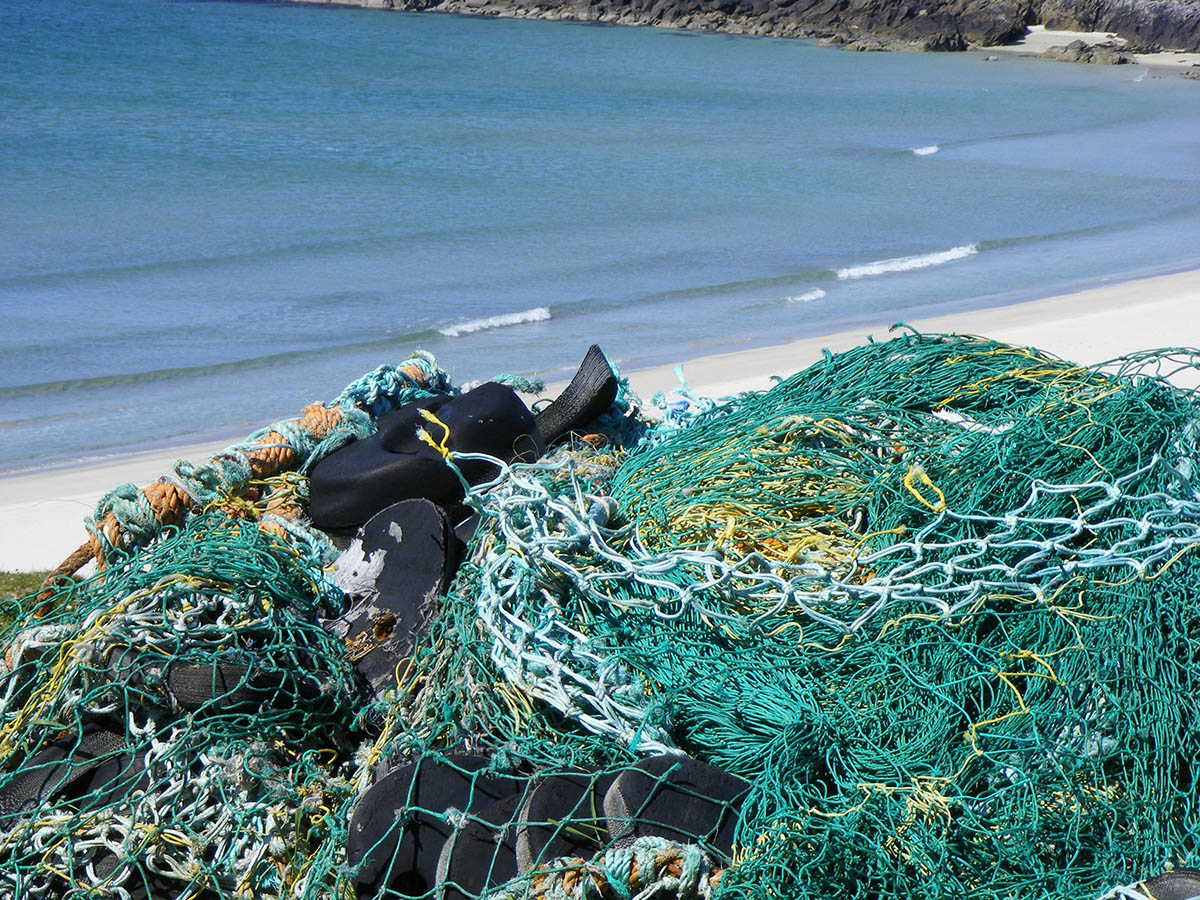 The tiny, twin prop plane landed at Sumburgh Airport in Shetland and we boarded the bus into town. It felt like an odd quasi-homecoming; the familiar made ineffably strange. Shetland is an archipelago of islands sitting in the middle of the North Sea. My Mum is a Shetlander and my extended family are still there; I’ve visited since childhood. Author Mallachy Tallack writes that the islands’ location at sixty degrees north — famously closer to Oslo than London — “is a story that we tell, both to ourselves and others. It is a story about where – and also perhaps who – we are” (Tallack, 2015, p. 3). While geographically isolated, Shetland is in the middle of a renaissance, not least thanks to the popular BBC drama series Shetland. I had landed in the middle of ‘Wool Week’ 2019: a major international event attracting passionate knitters to learn, admire and spend money on Shetland’s famous wool and traditional knitting (maakin, in the local dialect). It is big business for these far-flung and sparsely populated islands. The hotels were nearly full, and cafes, pubs and streets were busy with groups of enthusiastic North American visitors.

Johnson (2018) observes that Shetland has long been “a particular favourite” of social scientist visitors, too. Erving Goffman’s PhD thesis was based on covert fieldwork in Shetland’s most Northerly island, Unst, and the islands have continued to fascinate researchers. Social structures are distinctive in these close-knit, geographically remote communities, with a population of 23,000 people spread across 16 inhabited islands, including both locals (defined across generations, not just years) and abootcomers (everyone else). Having grown up ‘sooth’ (in mainland Scotland), my visits over the years have always contained the ambivalence of not-quite-outsider-ness. I’m a ‘soothmoother’ (not speaking Shetland dialect) but can understand well enough to get by. As an auntie once explained me to a shopkeeper: ‘no need for knappin (speaking English words) for her’. There has been significant inward migration to the islands in the last decades, but Shetland retains a truly exceptional degree of what we’d now recognise as social infrastructure (Kelsey & Kenny, 2021). There remains an extensive range of community events in local halls all over the islands. These dances, teas, quizzes and celebrations are organised, catered and run by local people, and often raise money for Shetland causes.

My own visit was fieldwork around a series of fundraising events being put on by a local maakin group, with all proceeds going to NHS Shetland’s campaign to buy an MRI scanner for the islands. One of the fundraisers had joined the campaign having experienced the “long, gruelling” journey to Aberdeen for scans every 3 months for several years. Shetland’s population doesn’t justify an MRI scanner based on NHS Scotland calculations, and so patients are transported either by airplane or on the overnight 12.5 hour ferry crossing to the hospital in Aberdeen. Their travel costs are reimbursed, but everyone I spoke to described the disruption to family life and work, and also the discomfort of these journeys. That evening, I sat in the corner of a hall with knitters, while we all drank tea, and ate soup and filled bannocks. I have neither inherited nor cultivated my maternal relatives’ formidable knitting skills, and, taking pity on me, one woman put me on pom pom making-duty with a small plastic gadget and strict instructions.

The MRI Maakers fundraising evening had many of the familiar tropes of Shetland community events, some of which Goffman observed 70 years ago. Fold-up tables and chairs were organised around the edge of the room. A cooperative squad of organisers filled huge metal teapots, sliced bannocks and served out salty reestit mutton soup, then cleared it all away and washed up in the kitchen. It was never clear to me that anyone was in charge, although everyone seemed to know who to ask if they had questions. A raffle was held, in which a huge number of donated items were announced in no particular order and interminably slowly. I have proud memories of winning a small electric toaster when I was 8, at just such a raffle. There was a familiar background buzz of companionable gossip, and many, many women knitting as they chatted. This crowd was  different, however: at least half of the attendees in the packed hall were visitors who (like me) had bought tickets that would help fund the MRI scanner. Lerwick’s Jarl Squad (from the Viking-inspired Up Helly Aa Festival held each January) turned up in full regalia for photo opportunities with excited tourists.

“When I was growing up, if you needed anything extra, then you just got out your knitting. And you knitted, to get extra money… And like, when I was growing up, probably the main things was knitting, fishing, or crofting. And my mum, sometimes literally, needed to knit to put food on the table. So it just was natural for me to think, well why does everybody not just get out their knitting and try and raise extra money that way?”

She had started attending local craft fairs and events to sell pieces of knitting, then someone from the NHS MRI campaign suggested she design a Fair Isle knitting pattern and sell it for the campaign. One family member created a PDF pattern for her design (even though “Shetlanders never usually work with a pattern”) and a website to sell both patterns and donated finished knitwear. Then, as the pattern became more popular than expected, another family member who worked in the Lerwick hospital suggested a regular knitting group.

“maybe we’ll start a maakers group, that might be an idea, right enough. So we started the maakin group in May. The Wool Brokers and Jamieson of Shetland donated wool, so we don’t have to buy any wool, it doesn’t cost us a penny. We had our maakin group, we meet every second Thursday, in the canteen of the hospital, from six o’clock ‘till late, at night.”

The pattern has been downloaded (with 100% of the fee to the MRI Scanner appeal) all over the world, reflecting the ongoing global appetite for Shetland knitting (Carden, 2019). The fundraiser I attended was a special ticketed event hosted by the MRI Maakers group for Wool Week, as an alternative to their usual canteen meeting.

Knitting followed me around in my visit to the islands. In Shetland, knitting is a pervasive activity, and a significant marker of cultural identity (Carden, 2019). The morning after the fundraiser, I visited the hospital where the maakin group met. I was there to visit another of my Aunties, then nearing the end of her life following several years living with cancer. She lay supine in the bed to avoid the pain of sitting up, a barely touched hospital meal pushed to one side, declaring herself “bored shitless and wanting home”. I sat by her bed and we talked about family, and then she told me dirty jokes that made me laugh inappropriately loudly for a ward environment. Throughout, apparently effortlessly, she knitted. The quiet click of the needles low down on her stomach was a background hum to our conversation, and she never needed to hold up the needles to check a stitch. Those jokes and the background of her perfect, constant knitting are my last memories of spending time with her.

I was, after all, in Shetland to work. The MRI Maakers are mobilising knitting as a central “identity vector” of Shetlandness (Carden, 2019) for their cause. Through their pattern and knitwear sales, they have contributed large sums to the Scanner Appeal directly, as well as generating global publicity for the cause. At the time of writing, the MRI appeal as a whole had raised 85% of the £1,650,000 needed for the scanner. Existing academic analyses of crowdfunding for healthcare focus on individuals trying to raise money for novel or unaffordable treatments, and often emphasise the risk to health inequalities when care entitlements depend on popular perceptions of deservingness. While surely there is some ambivalence across the community, those I spoke to were unconcerned by the need to fundraise for what is elsewhere a tax-funded service. Shetlanders are accustomed to their remoteness from services that are proximous for other populations, and fundraising seems hardwired into these close communities. When I asked an NHS manager how the appeal had started she explained:

“[A colleague] asked, can’t you do something for a scanner, we are so desperate for one, and it was mentioned. And the next thing – it was so quickly grabbed that it kind of almost just spontaneously grew into a bigger thing.  It was never really properly thoroughly discussed, it just grew.”

There was, of course, a bureaucratic business case and a plan for how NHS Shetland could meet the ongoing running costs of the scanner, based partly on cost savings from patient travel to Aberdeen. But fundraisers I spoke to had relatively little interest in these practical aspects of the campaign. Their descriptions of process emphasised the events not as a material means to an end, but as great fun. The maakin knitted community and connection, as well as hats. The maakin group, and their offshoots in care homes and on other islands, sounds like something dreamed up by a public health project looking to combat isolation. The anomalous creation of a formal pattern engaged knitters untrained in the Shetland approach (generally handed down through oral tradition) and in so doing brought money and more attention to the islands.

These connections surely contain many continued exclusions, as mobilisations of community always do. In their study of patients crowdfunding for their own access to experimental cancer drugs, Kerr et al (2021, p. 189) describe the fundraising as “practices of private patienthood… creating and breaking down solidarities in novel and important ways”. These solidarities are even more complex when the collective effort of fundraising is directed towards a collective goal, to improve, and not to circumvent, ‘standard’ NHS care. Charitable money has a long, complicated history in UK healthcare, which has been greatly magnified in the last year (Harris & Mohan, 2021; Stewart & Dodworth, 2020). But in our rush to assess its consequences for the collectivisation or privatisation of healthcare, it seems important to pause and note the processes along the way.

For now, I can theorise community action but I still can’t knit. The morning of my return journey from Shetland, I got a message from the ferry operator to say the boat was leaving two hours early to avoid a coming storm. On the way to the ferry terminal, I bought my very own pom pom gadget, and my Mum found a mixed bag of ends of wool in a charity shop. We boarded the ferry, I fed my kids some seasickness pills and hunkered down in our cabin to make pom poms while the boat rolled onwards past the headland.

Acknowledgements: Fieldwork was funded by the Carnegie Trust for the Universities of Scotland. The MRI Maakers website is raising funds for NHS Shetland’s MRI Scanner Appeal.

This blog was first published on The Polyphony website under a  CC BY 4.0 license