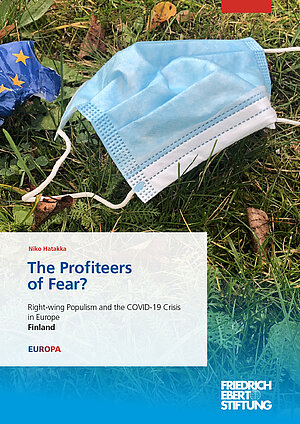 Populism in Action’s Finland focused Research Fellow Niko Hatakka has written a report for the Friedrich Ebert Foundation’s “The Profiteers of Fear? Right-wing populism and the COVID-19 Crisis” series. His contribution explores developments in Finland since the pandemic first began battering European countries in March 2020.

The Friedrich Ebert Foundation describe the series’ purpose as providing:

…reports from Sweden, Finland, Italy, France, Spain, Portugal, Greece and Germany – all countries with large or growing right-wing populist movements and parties. The reports explore the question, if right-wing populism in Europe has been able to benefit from the Corona-crisis. A synopsis will interpret and classify the developments in the individual countries in a comparative perspective.

In his contribution to the series Niko:

…analyses how the Finnish far right has reacted to the government’s handling of COVID-19 and the economic consequences of the virus during its first wave. It explains, how the populist radical right Finns Party has remained reasonably reserved in its criticism, and how the party has attempted to avoid affiliation with the Finnish online far right. Instead of uniting Finnish far right actors, COVID-19 has reinvigorated coalition building potential especially between the centre right and the populist radical right.

The full paper, along with the others in series can be read here in England and in German on the Friedrich Ebert Foundation website.