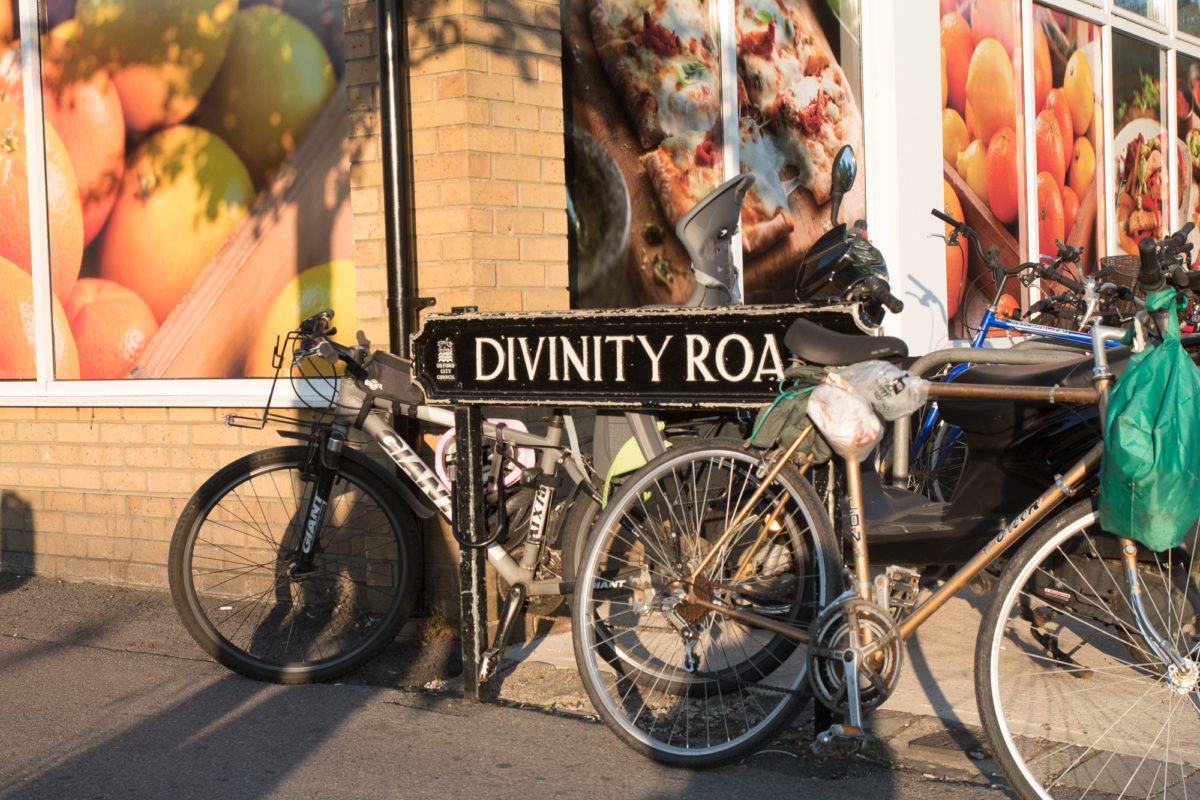 As part of a remarkable project to record lives on a single British street, documentary photographer Martin Stott has been capturing images from the age of coronavirus as it unfolds in a very local context. Here, Alexandra Harris chooses a small selection, and recommends a visit to Martin’s website where you can see the full series. All images are © Martin Stott.

A cobbled kerb-side, with the usual detritus of twigs and wrappers and cigarette ends caught between the cracks, and, blown here or thrown here, a very 2020 kind of cast-off: latex gloves, still holding the mould of whoever wore them, still rolled at the cuff where they were peeled off. I’m tempted to say there’s something ghostly in the image, but Martin Stott tends to steer refreshingly clear of hauntings and freighted symbols. He likes bright daylight in which we can see how things are.

Martin has been photographing places and communities since the 1970s. His images of the co-operative movement, of people in Mao’s China, and of Bhopal in the wake of the 1984 disaster, are all now valued for the social and cultural histories they tell, as well as for their distinctive qualities of openness, clarity, and keen watching. Martin photographs things so ordinary you hardly noticed they were there and bothers with every nuance of detail in a humble setting. He lavishes attention on pavements and dog-eared notices; in his portraits, people often look straight at the camera – there’s no pretence: they are having their pictures taken – but they are surrounded by the intricate business of their lives.

In recent years, Martin has focused on what is to be found within a few metres of his own front door. That door opens onto Divinity Road in East Oxford, a long street of Victorian houses just off the busy and super-diverse Cowley Road. Martin has lived here for more than thirty years, and has been active in community-building initiatives throughout that time. When the lockdown came, Martin went out with his camera. Many of his subjects will seem very familiar. Chalked pavements, children’s rainbows, unreadable eyes behind a visor: these are the visual language of 2020, passing across our screens each day. But here is one particular street, part of the global story but not exactly the same as anywhere else and containing multitudes within it. In the tradition of Mass Observation, the pictures tell us something of what is shared while revealing a wealth of idiosyncrasies. Each arrangement of window posters is individual. Each household is in its own lockdown. The relations between inside and outside, private and public, are being renegotiated.

How much can we tell about the street? We can sense the Thursday night atmosphere: families emerging from behind privet hedges or peering between the parallel-parked cars to see each other. The lockdown has made some neighbours more visible and part of the community; others have disappeared. Someone has needed the paramedics’ stretcher. There’s a party spirit further down towards the Cowley Road: housemates are making the best of things with an outdoor drink, though the flat roof of the Co-op isn’t anyone’s ideal terrace. Another group stands ready with new turf and spades: they are clearly embarking on a garden together. In fact they are medical students working at the sharp end of the pandemic through long hours up at the hospital. Their new lawn will give them a place to relax during the difficult months ahead.

The images of gutters and kerbs remind me of the sculptures made by the Boyle Family when they focussed in on certain squares of ground and made faithful reproductions of them in fibreglass and mixed media to hang in a gallery. They made us look at the pavement markings and the texture of tarmac. But any similarity here points up a contrast. The Boyle Family aimed for objectivity; they went to places they didn’t know and examined them like scientists. Martin has been trying to know this street for thirty years. He’s poised between objective recorder and long-term neighbour. He’s photographing ‘his’ place, with a curiosity and attention that comes from loving it. But he knows the street is always changing and that neighbourhoods are best not taken for granted.