On 2-4th October the Annual WTO Public Forum gathered representatives from governments, international organizations, businesses, Non-Governmental Organizations (NGOs) and academia to discuss the challenges and opportunities that the global commerce is facing at these turbulent times.

The number of participants of this year’s forum peaked the highest in its history – around 2500, as has been pointed out at the opening ceremony by the WTO Director General Roberto Azevêdo, which is not surprising given the fact that international trade has been recently dominating the headlines. 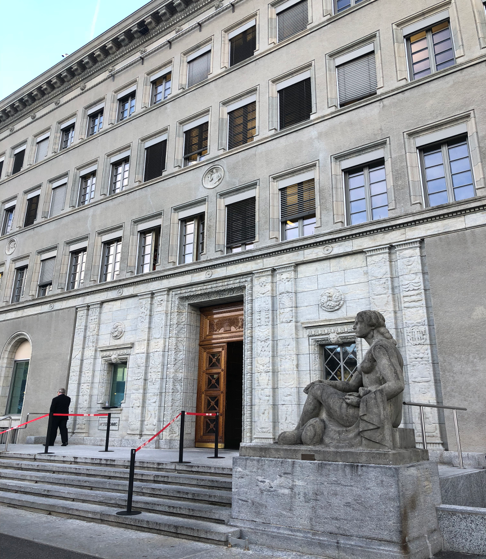 The underlying motive was focused on the role of the WTO in adjusting to the changing paradigms of the global commerce: whether its rules are fit for future and how they should improve to better reflect today’s realities. In its opening speech, Azevêdo expressed a concern that if countries do not come together to fill the gaps in the multilateral system, it will be left out to courts and unilateral actions that would pose risks of creating new inequalities.

A variety of topics within the agenda generally flagged up four main concerns that will be briefly addressed below: digitalization, unfair trade practices, sustainable development and the WTO reform, but also a range of sessions focused on investments, Small and Medium Enterprises (SMEs) and women empowerment.

It has been voiced out that the WTO has to adjust; otherwise, it will become outdated and will no longer fit for purpose. In this vein, at one of the panels Mark Wu, Professor at the Harvard Law School, also noted that “we cannot apply XX century approaches to fix the XXI century problems”, thus we need to reimagine certain rules.

The punch line of the key sessions discussing the digitalization and its trade implications was that unprecedented technological change we are facing now is an objective reality that is already shaping the world trade and will provide significant transformations in the future, irrespective of whether we want it or not. This is an inevitable process we have to embrace and the main question arises as to what should be the response of the multilateral system.

The World Trade Report 2018 that has been launched at the Forum by examining the impact of digitalization, found that it will boost trade up to 2 per cent per year, amounting to around 34 per cent by 2030. It especially focused on the effects of the innovative technologies: blockchain, internet of things, artificial intelligence, 3D printing. Robert Koopman, Director of the WTO Statistics Division, pointed out that these technologies will help to significantly reduce transportation, transaction costs, and facilitate customs procedures.

On the other hand, it is inevitable that the structural changes brought up by new technologies will lead to more job loses. In its opening speech, Azevêdo mentioned that by 2025 for the first time in history machines will perform more tasks than humans, which predictably will wipe out 70 million jobs. Already now, according to Susan Lund, Partner at McKinsey Institute, companies such as Adidas and Nike have shoes that can be manufactured entirely by machines.

The development effects of digitalization might be ambiguous. On the one hand, speakers from the business community expressed lots of optimism regarding implications for developing countries and SMEs. Jack Ma from Alibaba Group, for instance, pinpointed the role of big online platforms for small businesses that help them gain a global reach without significant upfront investments. At the launch of the World Trade Report, it has been also underlined that developing countries could be the greatest benefactors: according to the estimates, their share in the global trade could rise from 46 per cent to 57 per cent in 2030. 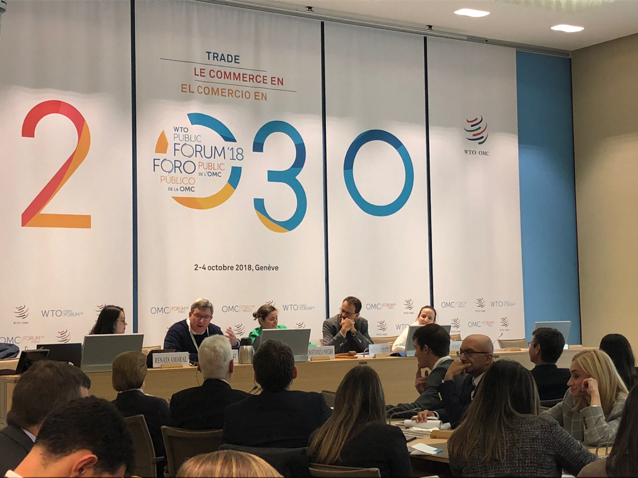 However, it is crucial to understand that this is possible only under the condition that the supportive environment will be created helping to implement the technology. The Ambassador of Costa Rica Álvaro Cedeño Molinari at one of the panels brought to the attention the fact that we are living in times of clash of industrial revolutions: while the developed world is discussing the rise of new technology, some low-income countries do not even have electricity, let alone technological connectivity. Susan Lund also underlined that automation might lead to regionalization bringing the manufacturing back to the developed world and decreasing trade with developing countries.

At the working session jointly organized by the International Chamber of Commerce (ICC) and B20 Argentina the focus was on the need to ensure that the positive impact of technological change is shared with developing countries and small firms, because it is decisive for the support to the free trade. As it was said by Azevêdo, “we cannot just ignore the technological change, but we should discipline it to bring inclusivity, because the cost of inaction is decreasing relevance of the multilateral rules.

The most prominent panel addressing this topic was jointly organized by the European Commission, USTR (United States Trade Representative) and the Government of Japan and followed up on the Joint Statement on Trilateral Meeting of the Trade Ministers of the US, Japan, and the EU. It primarily focused on the WTO subsidies disciplines and what should be done to fix them in order to preserve the level playing field in trade.

Jennifer Hillman, Professor at the Georgetown University, pointed out to the failure in substance of WTO rules due to their inability to discipline subsidies. Even though countervailing duties are utilized more often, they do not cure the fundamental problems.

Within the discussion, Jennifer Hillman and Mark Wu outlined the following main concerns. Firstly, lack of transparency. Mark Wu demonstrated the statistics on WTO notifications featuring that key players China, the US and EU often notify subsidies several years after their actual adoption when it might not be relevant anymore. Secondly, Jennifer Hillman pinpointed that the definition of a subsidy contributor is too narrow and needs to be expanded to consider a combination of factors, such as function, ownership, control and causation. Thirdly, there is a problem with remedies when the excess capacity has already been built due to the subsidy: the subsidy itself might cease to exist, but its effects remain. Thus, the lack of effective remedies might provide an incentive for governments to temporarily violate the subsidy disciplines.

Mark Wu also pointed out that conception of economic archetypes of market and non-market economies is outdated and needs to be revisited.

The idea of reconciling trade and sustainable development objectives is not new, however, as it has been discussed at numerous sessions, still there is no consensus on how to make these objectives mutually reinforcing. 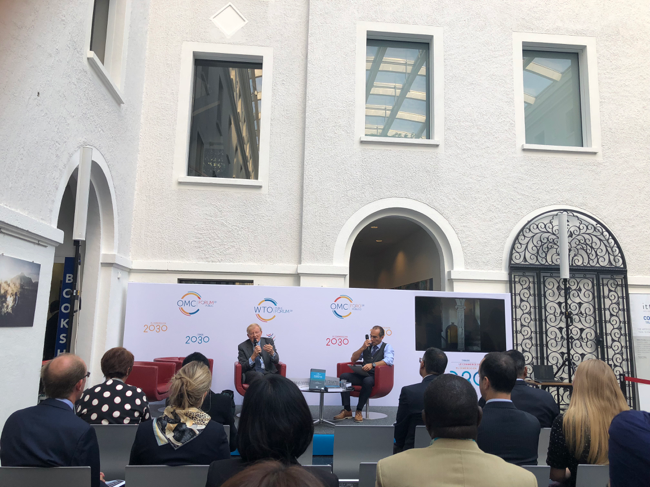 A new joint report by the WTO and the UN Environment has been launched at the Forum featuring practical ways in which economic, development and environmental goals could support each other. Erik Solheim, the Director of the UN Environment called it a “triple win solution”. The publication mostly focuses on promoting green technologies, which can expand and become more affordable due to trade, as the Director General Azevêdo mentioned it during the session. The idea is that trade can drive down costs, permitting to replace inefficient and outdated polluting technologies with those that are new and environmentally friendly. In practical terms, it was called on to strengthen the multilateral cooperation and work on elimination of trade barriers that are as well harmful for the environment. One example of the latter would be the fishery subsidies.

The need for a concerted action was nicely illustrated at the session on circular economy. Richard Gower from the international NGO Children in Crisis, shocked the audience with the statistics: 90 percent of the electronic waste end up in developing countries importing second-hand electronics, which later become waste disposed in a non-sustainable way – e.g., used IPhones are just burned on open fire in Ghana. Thus, there is a need to develop multilateral solutions to effectively minimize environmental impact.

In one way or another the need for a WTO reform was brought up in a majority of panels and it seemed like there is a consensus that the multilateral system requires changes. However, when it comes to concrete reform proposals, there is a significant disagreement among key players. The session on the WTO reform organized by the Bertelsmann Stiftung including as speakers, among others, US and EU ambassadors to the WTO Denis Shea and Marc Vanheukelen, as well as a former Chinese ambassador Xiankun Lu, highlighted these major points of contestation.

Both the US and the EU sides confirmed their common views as regards challenges of non-market practices, such as subsidies and forced technology transfer. They also agreed on the need to introduce a development differentiation to better reflect the today’s realities when the group of developing countries at the WTO includes countries with drastically different economy sizes and export power. Shea mentioned that it is especially important for future multilateral fishery subsidies negotiations, where preferential treatment shall be given to genuinely low-income countries.

However, the panelists unsurprisingly strongly disagreed when it comes to the Appellate Body (AB) reform. Shea expressed the US concerns, which as he said have been building over around the past 15 years that the AB system moved away from the Uruguay Round agreements. He said that the EU proposal to extend the single term of AB members would undermine their accountability.

As regards China’s position, Xiankun Lu primarily agreed with the EU’s ambassador that finding ways to preserve the effective dispute settlement system should be a top urgent matter. However, he highly criticised the US and EU suggestions on unfair trade practices and development differentiation. Adding a bit of an irony, he said: ‘we are not talking about the WTO reform, we are talking about China reform’. He emphasized the need to pursue pro-development agenda rather than enlarging the South-North gap and noted that special and differential treatment should be preserved.

The session also looked at some of the concrete suggestions for the WTO reform prepared by the Bertelsmann Stiftung High-Level Board of Experts on the Future of Global Trade Governance.

All in all, the silver lining of this year’s forum was that despite the growing popularity of the economic nationalism, many countries remained strong supporters of the multilateral system. As it was also demonstrated by the participation at the Forum, so as the businesses community for which the multilateral rules are a source of certainty salient for their effective operation. While the future of the multilateral system still remains not clear and will very much depend on its ability to effectively address today’s challenges, what can be said for sure is that trade will remain in headlines for the years to come.