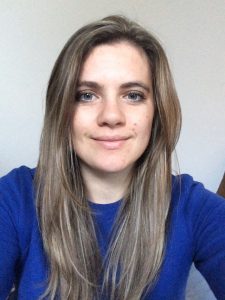 Abstract: In recent years, international trade and global climate change have become closely linked. To date, due to fundamental differences, liberalizing trade and preventing global warming have proceeded on separate paths. Indeed, opening the market inevitably increases carbon footprint through the use of transportation. However, trade can also have a positive impact on the environment through trade agreements by enhancing the spread of cleaner technology. This post describes the different effects trade can have on the environment and more specifically on the environment of countries bounded by a trade agreement.

The past half-century has been marked by a unique expansion of international trade. World exports have increased from $62 billion in 1950 to $17,706 billion in 2017 (WTO). In comparison, the level of world GDP rose eightfold over the same period. As a consequence, the share of international trade as a percentage of world GDP increased from 24.1% in 1960 to 71.7% at the end of the period. This unprecedented growth of trade goes hand-in-hand with the increasing number of free trade agreements (FTAs). Indeed, FTAs have become increasingly prevalent since the early 90’s, with 291 Regional Trade Agreements (RTAs) currently in force (WTO, 4 January 2019).[1]

While FTAs play a key role in the global value chain, they are also disturbing the environmental balance of the world (Ruta, 2017). Indeed, on the one hand, promoting freer trade, by lowering trade barriers and opening markets, boosts economic growth, which tends to increase greenhouse gas (GHG) emissions. However, it also allows bigger markets to spur technological innovation and diffusion, reducing the GHG intensity of economic growth. Looking at the US manufacturing sector, Levinson (2007) finds that newer technologies are better for environmental quality and that trade enables these newer technologies. Davies and Batrakova (2012) find that technology upgrading had a positive effect on environmental quality. Fundamental differences between the environmental and the trade regime can be explained by their different goals. The climate regime aims at correcting market failure whereas the trade regime is rather a response to government failure.[2]The first regime would want to influence individual behaviour, requiring flexibility at the national level (Charnovitz, 2003).

However, opportunities to make these two regimes more complementary exist. FTAs could help spreading cleaner techniques to improve standards. More precisely, environmental provisions in trade agreements could increase the convergence of environmental standards and participate to the reduction of the carbon footprint associated with freer trade.

The impact on trade on the environment

As mentioned above, the impact of trade on the environment is unclear. Indeed, trade necessarily involves energy use for transportation, with resulting air pollution and other environmental impacts. On the other hand, freer trade may facilitate the spread of environmentally friendly technology and the tendency to promote more efficient production will tend to reduce materials and energy use per unit of output.

The impact of trade on the environment can be categorised into three effects: (i) the scale effect, (ii) the composition effect and (iii) the technique effect (Grossman and Krueger, 1991).

The scale effect refers to the impact on GHG emissions due to the increased output or economic activity created by freer trade. Trade opening is expected to increase economic activity and thus energy use. The composition channel refers to the way trade liberalization changes the mix of a country’s production towards those products where it has a comparative advantage. According to the theory of comparative advantage (Ricardo 1817), trade causes countries to specialize in the goods that they produce most efficiently and thus to become more efficient in their use of resources, thereby conserving resources and avoiding waste. The composition effect will result in less GHG emissions if the expanding sectors are less energy intensive than the contracting sectors.

Finally, freer trade can lead to improvements in energy efficiency: the ‘technique effect’. This channel can come about in two ways: (1) opening markets will increase the availability and lower the cost of environmental-friendly goods, services and technologies and (2) the income growth resulting from international trade can lead society to demand better environment.

While the scale and technique effect tend to have the opposite effect, the impact of the composition channel will depend on the relative energy use of the expanding sectors in comparison to the contracting ones. The total effect on the GHG emissions will thus depend on the magnitude of the three channels.

The last effect, the technique effect, represents the principal channel through which opening markets can help mitigate GHG emissions. Although the WTO rules do not allow countries to restrict trade for environmental reasons, [3] FTAs could help to meet the challenges of global warming, while negotiating liberalization of environmental goods and services.

The impact of FTAs on the environment

The second hypothesis is referred to as the factor endowment hypothesis (FEH). Based on this hypothesis, trade flows are determined by the amount and type of resources owned by trade partners, consistent with the Heckscher- Ohlin-Vanek theory of comparative advantage. Developed economies are often endowed with physical capital while emerging economies are typically endowed with labour capital.[4]Thus, developing countries tend to produce more labour-intensive goods while developed countries tend to produce more capital-intensive products that require more energy use (Copeland & Taylor 2013). As a result, FTAs may render developed countries with more pollution.

Using Indian data,  Mukhopadhyay, K., & Chakraborty, D. (2006) tested these two hypothesis. They find no support for the PHH however, evidence does support the FEH, as the country export more labour intensive goods which are more economically friendly. Their results also emphasise that differences in policy alone do not imply that trade liberalization will drive ‘dirty industries’ to migrate to less regulated countries.

The third hypothesis, the ‘Porter hypothesis’ assumes a race to the top (Porter, M. E., & Van der Linde 1995). Based on this hypothesis, developed countries may continue to make new and stricter environmental regulations that encourage innovation and in turn, increase the environmental quality of all the parties of the agreement.

The last hypothesis developed in the literature involves a ‘race to the bottom’. According to this hypothesis, developed countries will reduce their existing environmental regulations in order to compete with less environmentally regulated countries where the cost of production is lower. In a report to the Swedish Globalization Council in 2009, Jeffrey Frankel wrote that a large-scale increase of production can create a ‘race to the bottom’ for national environmental regulations but raises the hope that new production facilities will bring cleaner techniques and innovative power production.

Nemati et al (2016) empirically examined the relationship between FTAs and GHG emissions depending on the type of agreement. To this aim, the authors focus on three case studies:  MERCOSUR, an agreement signed between only developing countries, NAFTA, where parties are both developed and developing countries and the Australia-US FTA (AUSFTA), signed only between developed countries. They found that FTAs signed between only developing (MERCOSUR) or only developed (AUSFTA) countries have respectively a beneficial effect and no environmental damage on the world environment. However, NAFTA has increased global GHG emissions, supporting the PHH.[5] Based on a gravity framework, Yao et al (2019) found a positive impact of FTAs on bilateral carbon-dioxide pollution. In addition, when running an income-based country analysis, the authors find mixed evidence regarding FTAs. The agreements appear beneficial for high-income countries while damaging for upper and lower-middle-income economies’ environment.

The convergence of environmental standards

Figure1: Environmental Norms in Trade FTAs by  level of development 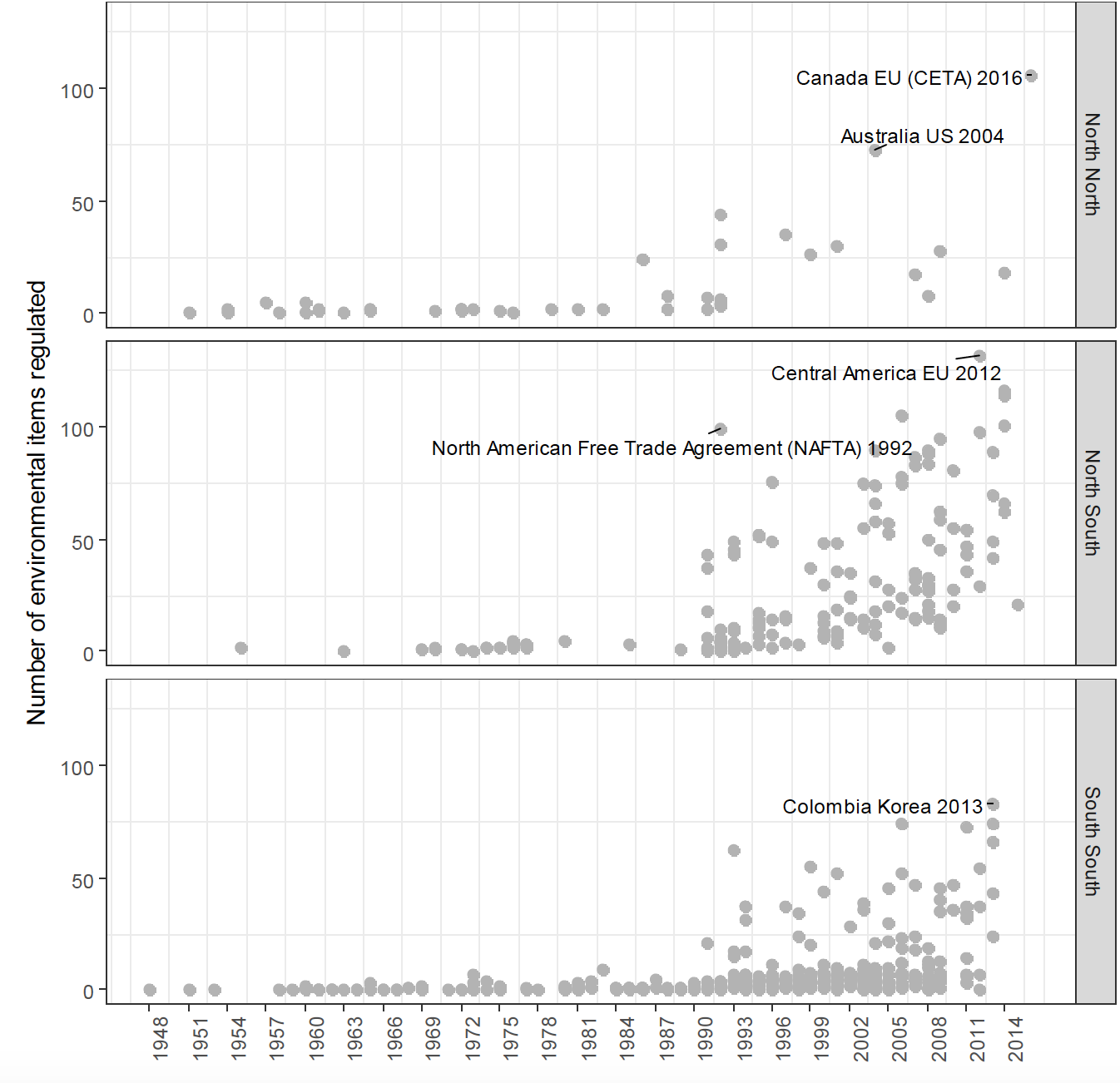 Trade liberalization has significant ramifications for the effort of climate change. Despite a growing interest on the effect of freer trade on environment, no consensus has been reached. The complex relationship between trade and environment has become a focal point for international as well as national policy makers. The inclusion of environmental provisions in trade agreements could allow countries to mitigate harmful effects freer trade can have, if environmental policies of both industrial and developing countries converge.  FTAs often contain a chapter on “Trade and Sustainable Development”, however parties typically only reaffirm commitments made under multilateral environment agreements. The incentives might not be enough for the strengthening of international standards.

Ricardo, D. (1817). On the Principles of Political Economy and Taxation: London.

[1]These correspond to 467 notifications from WTO members.

[2] Market failure occurs when there is an inefficient allocation of resources in a free market. Market failure can occur due to a variety of reasons, such as monopoly power, negative externalities and asymmetric information while government failure occurs when government intervention in the economy causes an inefficient allocation of resources and a decline in economic welfare. For instance, barriers to free trade imposed by governments can lead to a decrease in economic growth.

[3] Although the WTO recognizes a special exception to trade rules under Article XX for resource conservation and environmental protection, its panel rulings have interpreted this narrowly (Harris, 2004)

[4] Despite some developing countries are rich in natural resources, such as oil (Venezuela, Saudi Arabia, Iran, and Iraq are in the top 5 countries with the largest oil reserves), they are constrained by capital borrowing. These countries will thus export their raw natural resources and not processed good.

[6] In Chapter 4 “Technical Barriers to Trade, both parties commit to working closely on technical regulations for testing and certifying products. ” The aim of Chapter 5 “Sanitary and Phytosanitary Measures”, is to ensure that food safety and animal and plant health do not create unjustified barriers to trade. In addition, chapter 21 develops the objectives of regulatory cooperation. Sustainable development and environmental development objectives are detailed in Chapter 22 “Trade and Sustainable Development” and 24 “Trade and Environment”. EUJEPA is the first EU FTA that make a commitment to both the United Nations Framework Convention on Climate Change (UNFCCC) and the Paris agreement. It also includes a separate chapter in regulatory cooperation, chapter 18, highlighting its commitment to reduce non-tariff barriers.