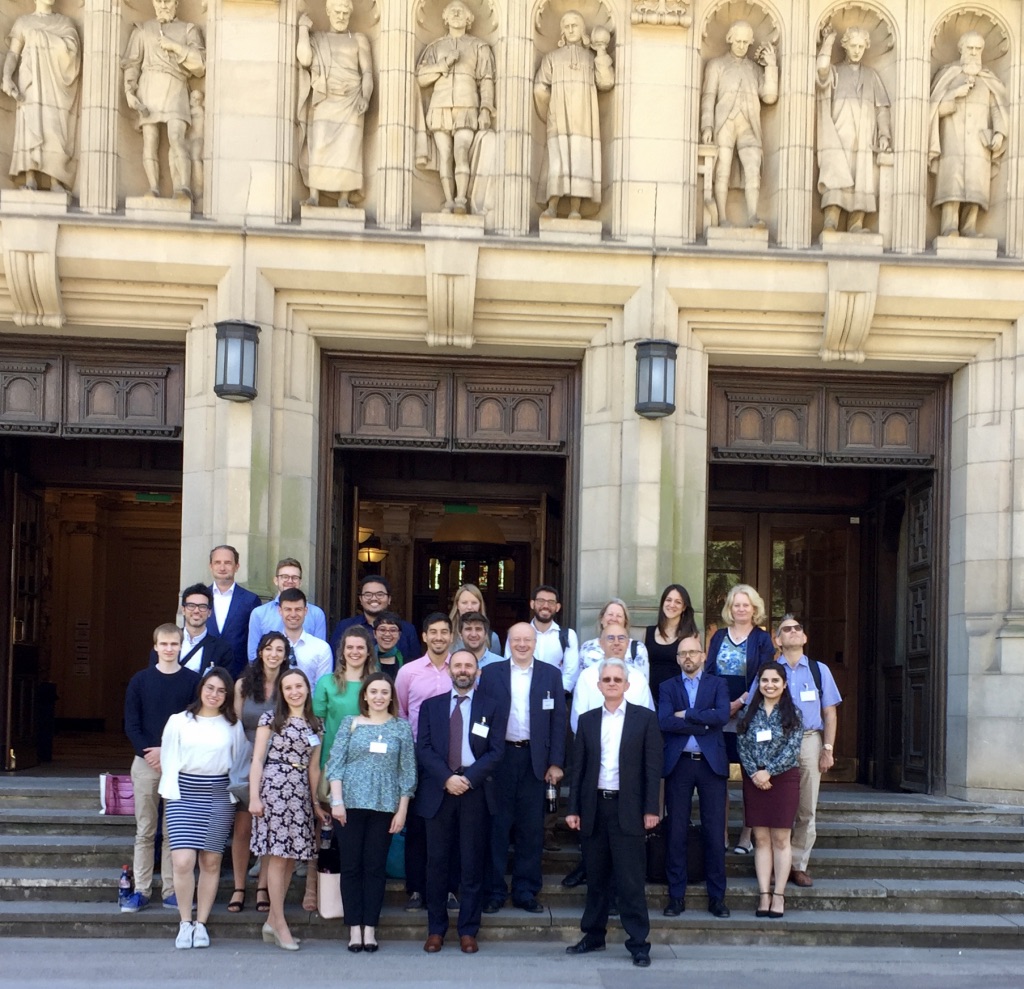 The Early Stage Researchers (ESRs) took part in the 6th Institute of European Law Conference “Transatlantic Perspectives: The future of European Law and Policy” held by the Birmingham Law School. After attending an inspiring keynote “The Changing Structure of International Economic Law and the Future of Regulatory Cooperation” given by Professor Thomas Cottier (World Trade Institute), the ESRs had the opportunity to present their working paper in different workshops. 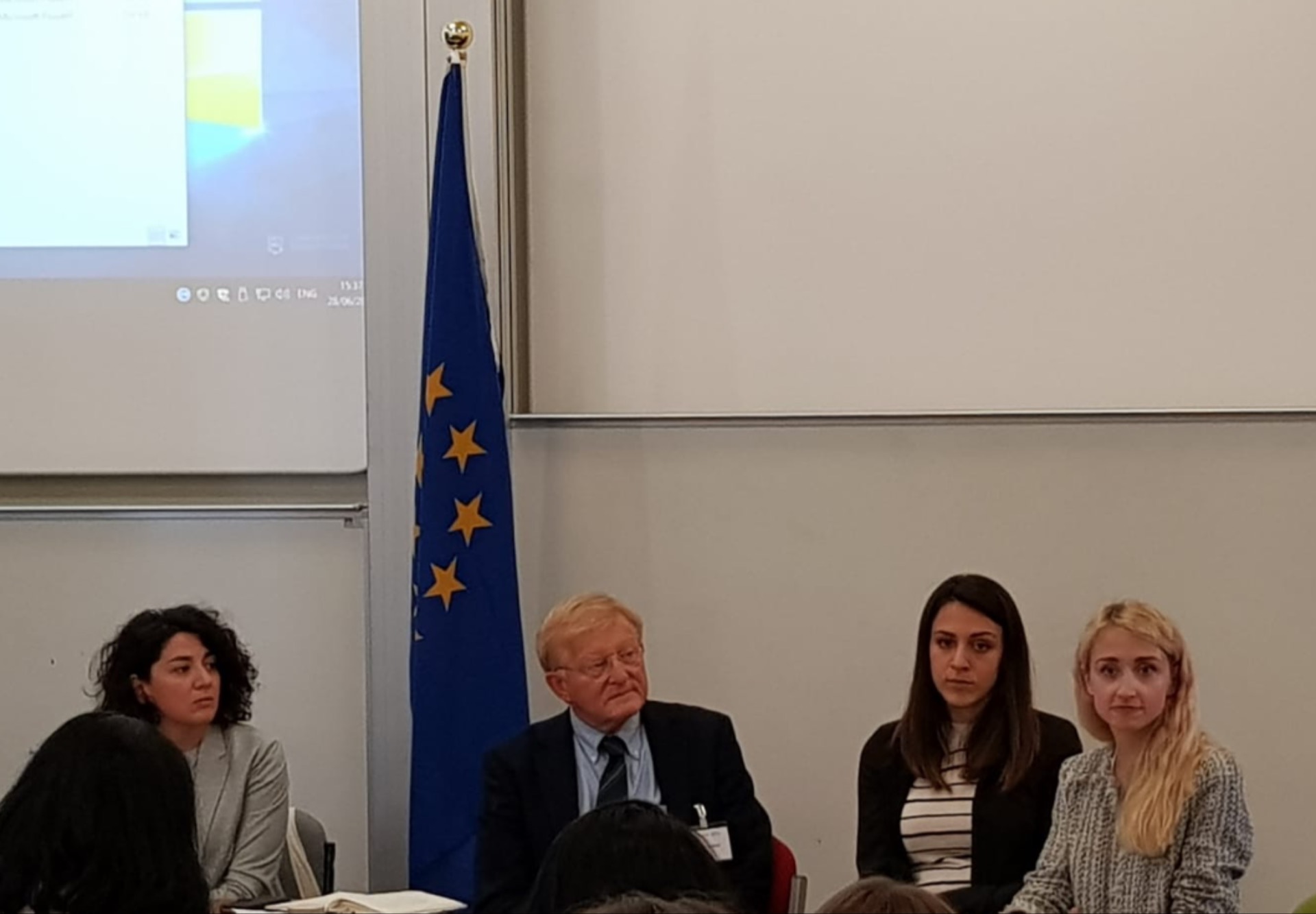 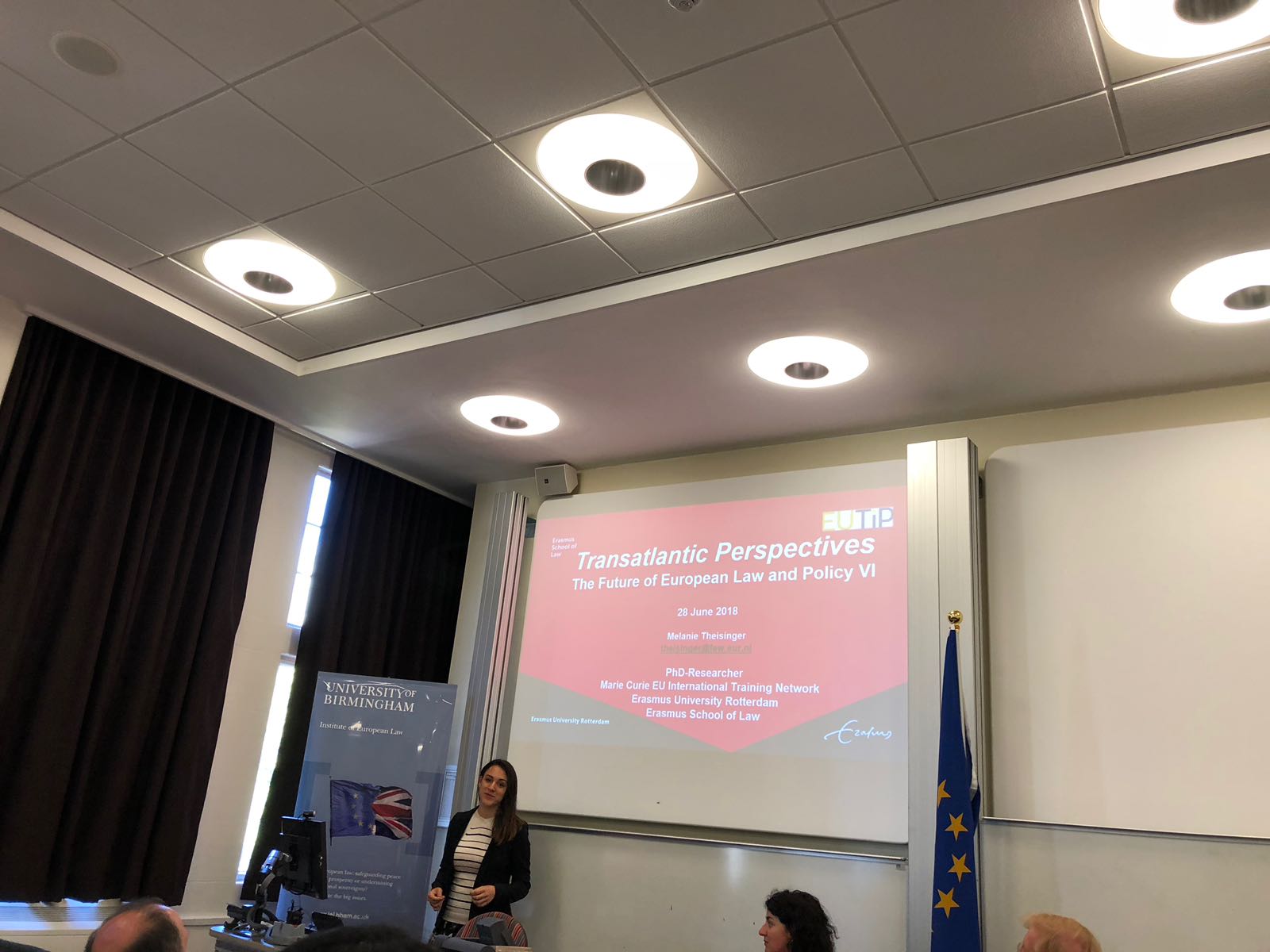 She discussed the tension of exogenous influences on path-dependent structures in the trade regime. By way of proposing to compliment the functional and low-politics approach with changing ideational objective and purpose assigned to trade agreements. This is to understanding shifting preferences and path dependencies in trade agreements. 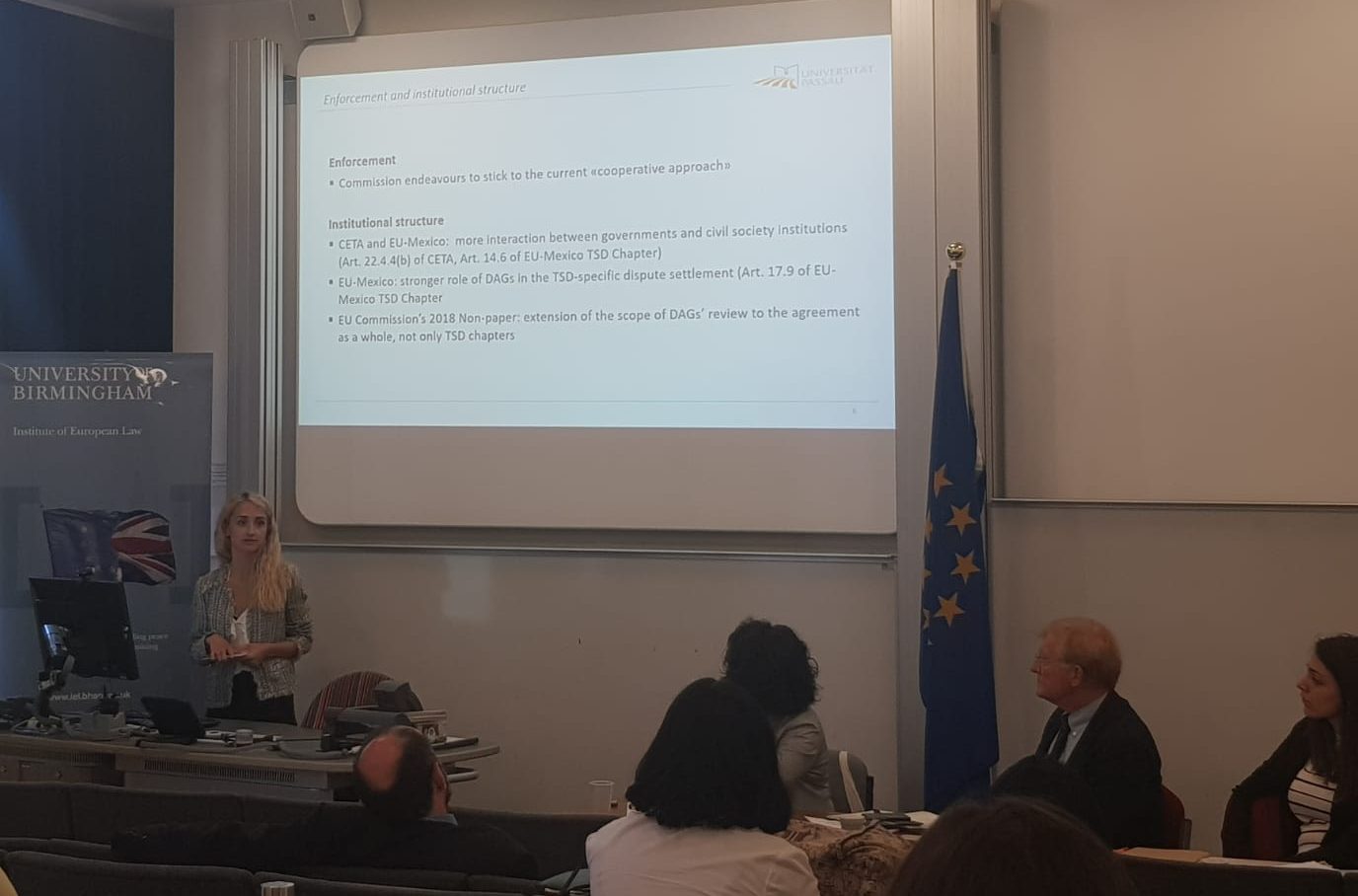 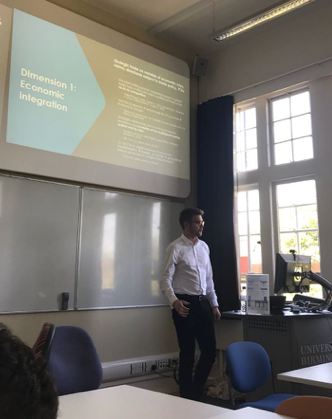 He presented a first draft outline of the conceptual framework he is currently developing as part of his dissertation. It featured the three dimensions through which we can ascertain the strategic impact of trade instruments on states and the system which they inhabit. It also offered some preliminary theoretical notions derived from the ‘geoeconomics’ literature, ought to offer a framework to understand and assess various trade policy activities of the European Union (EU). The presentation was part of the panel ‘Foreign- Security- Trade- Policy’, with contributions from academics from the University of Exeter, King’s College London, and the University of Speyer. 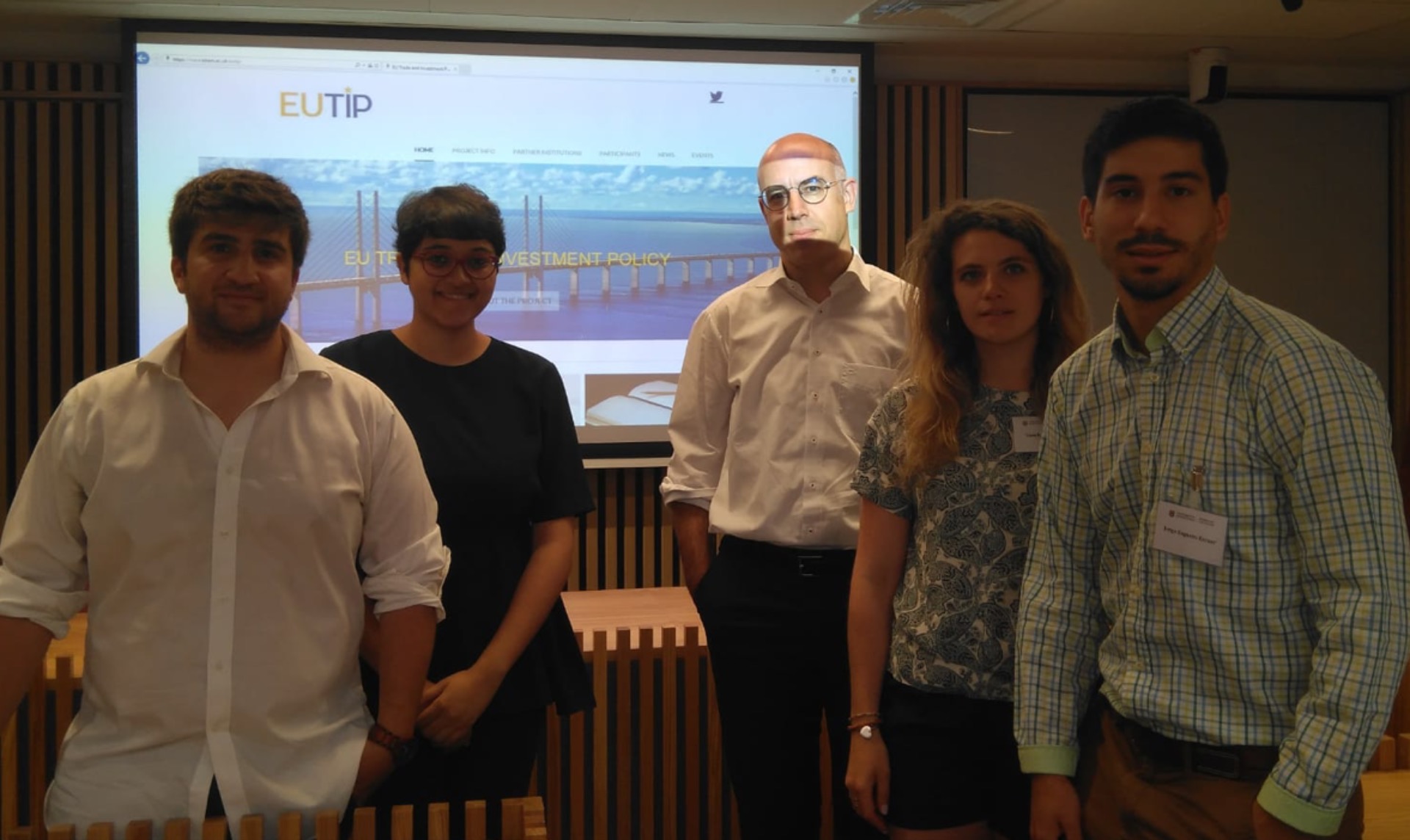 Paper presented: The impact of trade agreements on the agri-food system, diet and health in Europe – Jorge Soguero Escuer 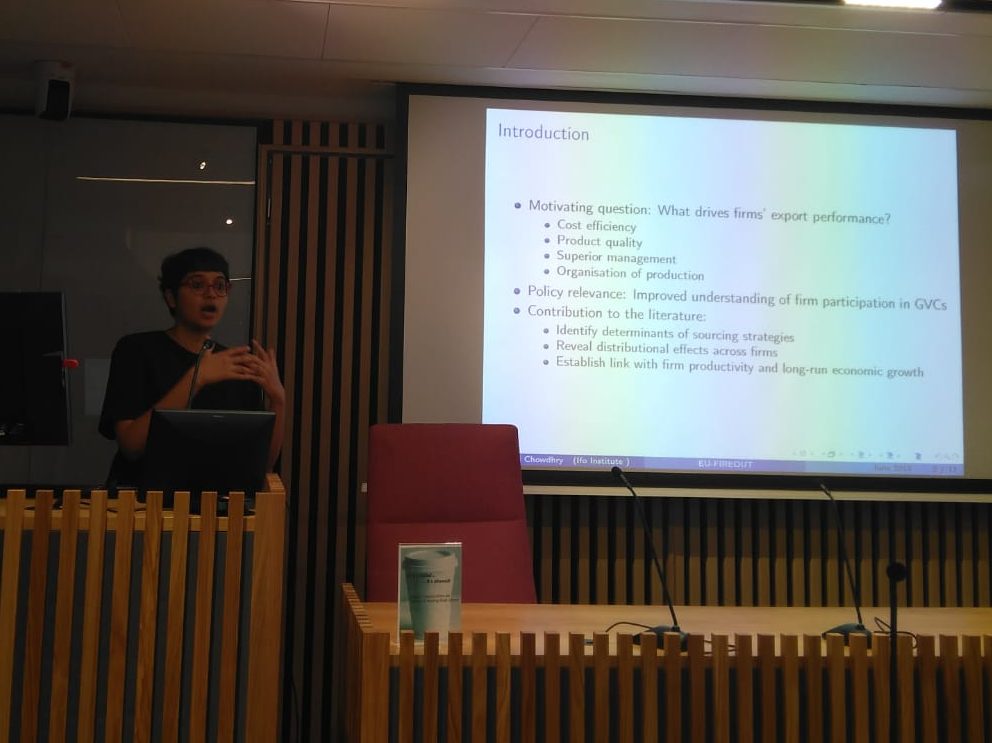 She presented the motivation and empirical strategy for conducting her latest research on the impact of outsourcing shocks on firms’ input sourcing behaviour and productivity. Using disaggregated customs and enterprise data from France, this paper would analyse which firms are more likely to begin outsourcing and various other dimensions of firm adjustment on the input side following an exogenous trade shock. She also attended presentations on the relationship between trade liberalisation and household health expenditure, measures to quantify export opportunities and the impact of bilateral investment treaties on global value chain formation. 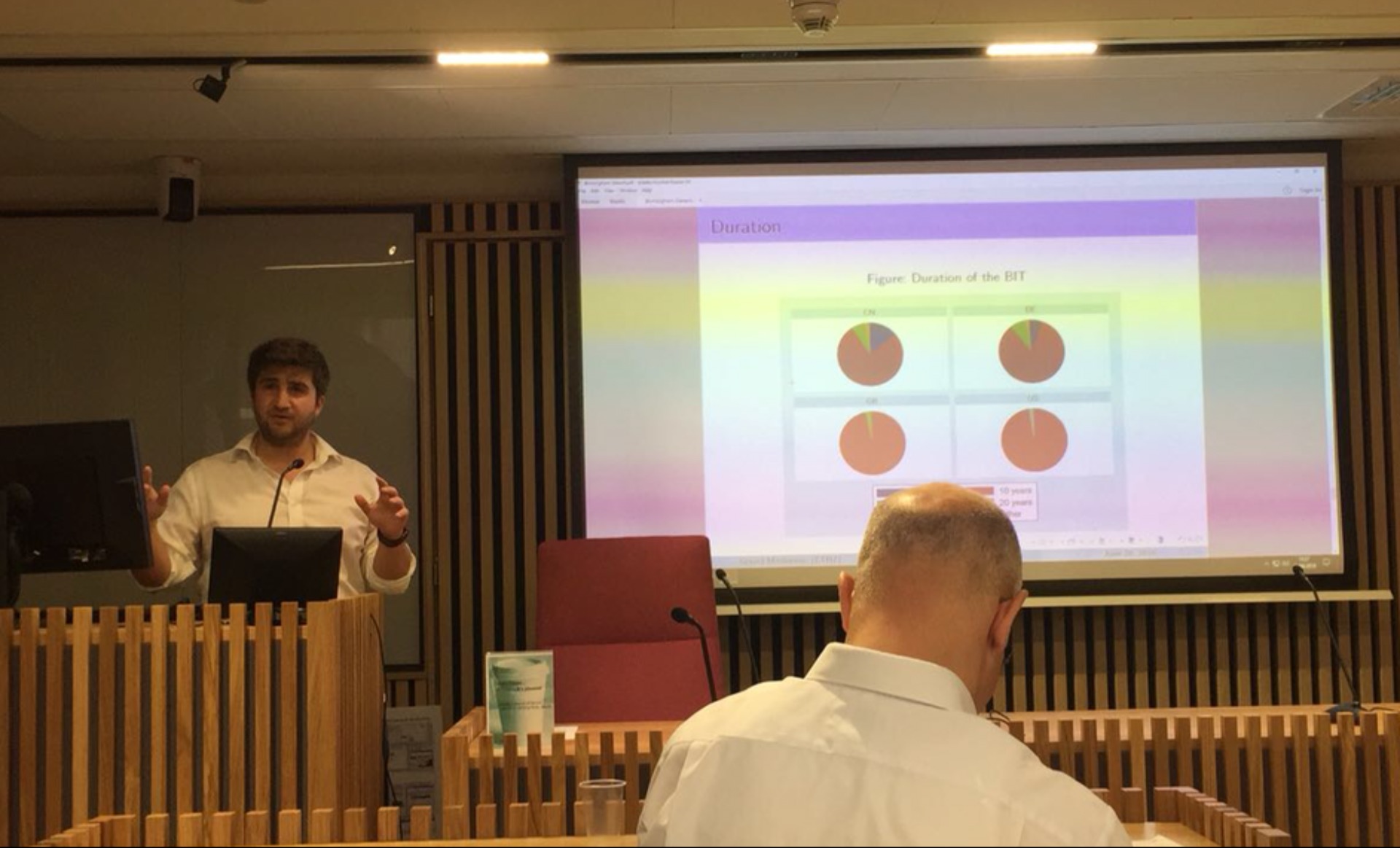 The study presents two novel data sets that are used to uncover the effect of Bilateral Investment Treaties (BITs) on the organization of global value chains. Namely, a data set of ownership relationships at the firm-level using the ORBIS database further complemented with potential industry-level value chain relations using the WIOD database. And secondly, a new database encompassing the universe of BITs signed by countries and country groups that – in contrast to previous data sets – contains information on the characteristics of the specific BITs. These characteristics include, among others, the different provisions for international investment protection such as ISDS (Investor-State Dispute Settlement) and different provision on performance requirements. 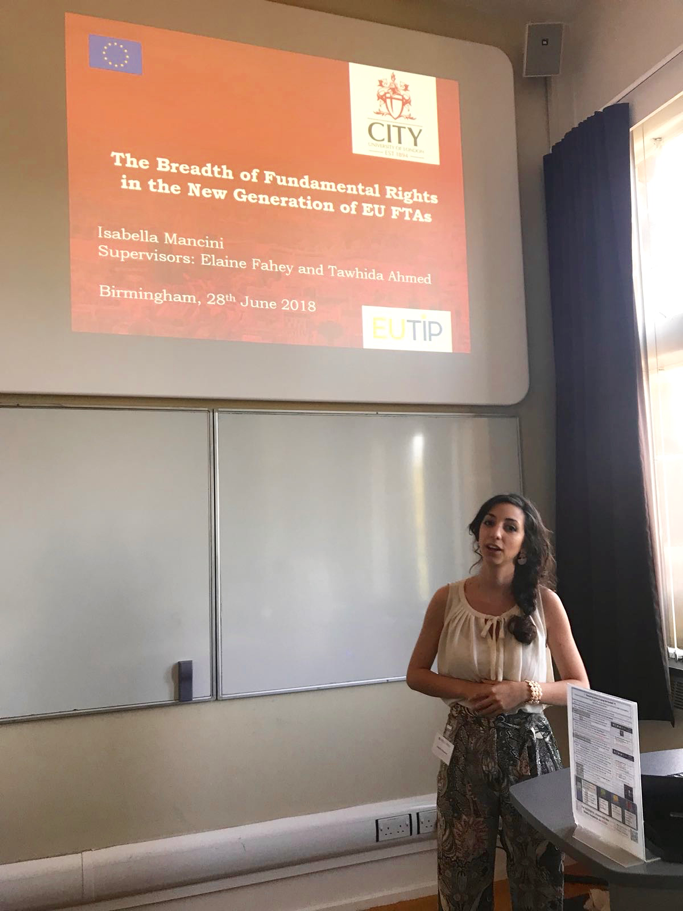 She gave a presentation on “The Breadth of Fundamental Rights in the New Generation of EU FTAs”, asking which obligations arise for the respect, protection and fulfilment of which rights; while reflecting upon a useful way to taxonomize and define Fundamental Rights in Trade Agreements. She showed that the FTAs (Free Trade Agreements) with Canada, the US, Singapore and Japan share a common denominator given by the reference to the UDHR (Universal Declaration of Human Rights) and fundamental ILO (International Labour Organization) conventions. From here, divergences were highlighted in terms of both scope and degree of obligation, with CETA (Comprehensive Economic and Trade Agreement) displaying the deepest commitments with respect to Fundamental Rights. 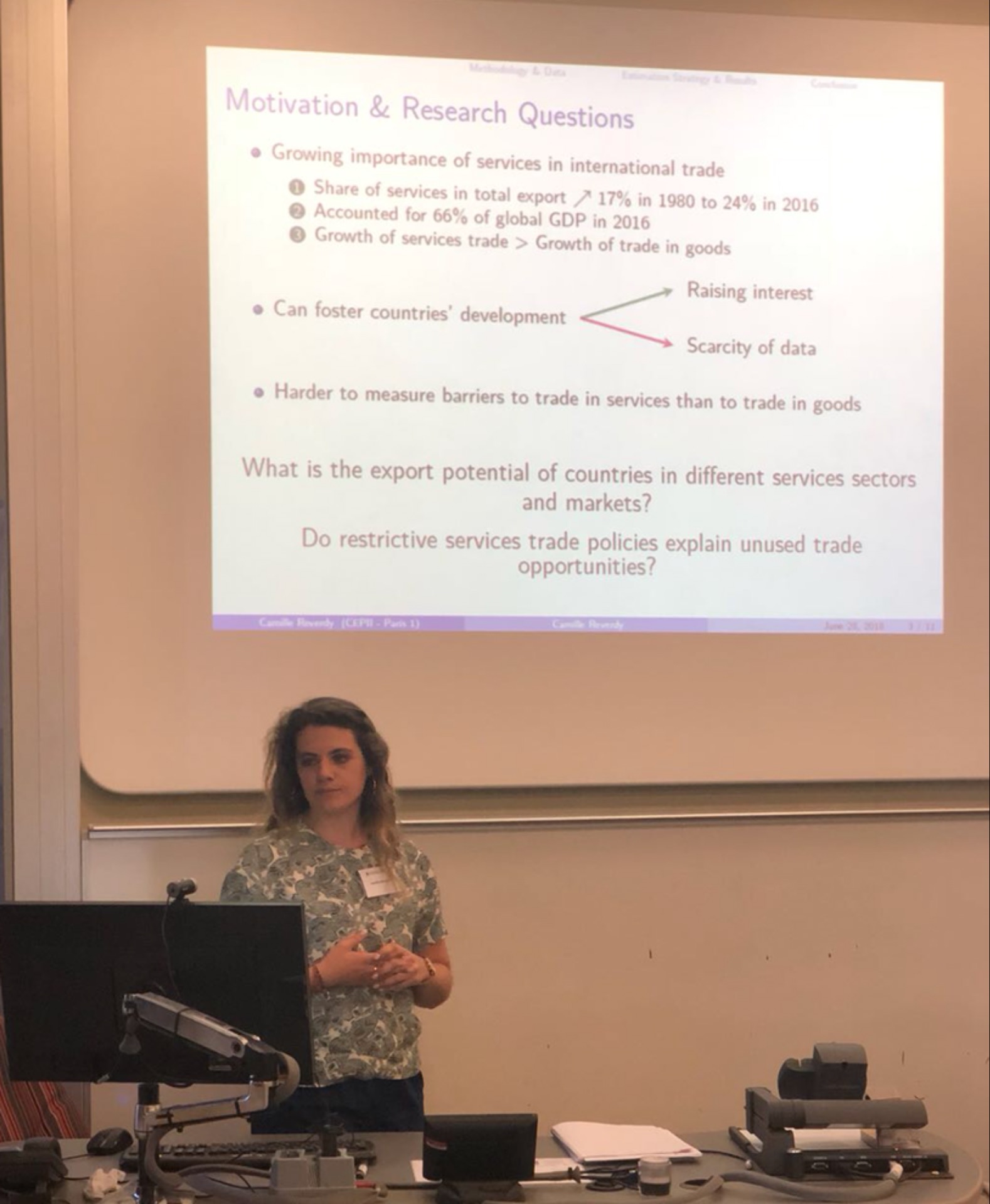 She presented a working paper on untapped trade potential in services and how policy measures can explain these unrealized opportunities. In particular, the study calculates trade potential values between two countries in a particular sector and compares this value to the actual trade value to assess the potential trade growth. In a second time, she explored to what extent restrictive trade policies implemented by the importing country are responsible for these unrealized trade potentials. Accurate comments were provided by the discussant and the audience. 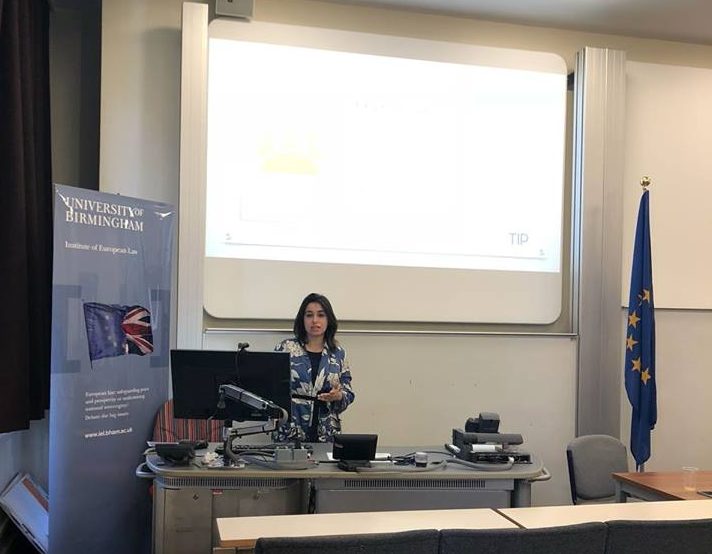 Her presentation aimed to discuss possible liberalisation of trade in services within the CETA (Comprehensive and Economic Trade Agreement). To this direction, she focused upon the impact of regulatory cooperation on services liberalization. She found that the new provisions and the relevant Chapter on Regulatory Cooperation did apply to services, and could be promising given the right implementation. She also tried to explore the limits to this liberalization via regulatory cooperation. Limits were found first within the Agreement itself and second arising from the unclear implementation of the Agreement. 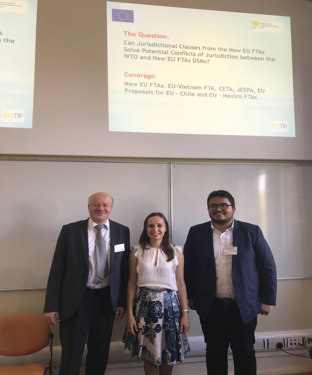 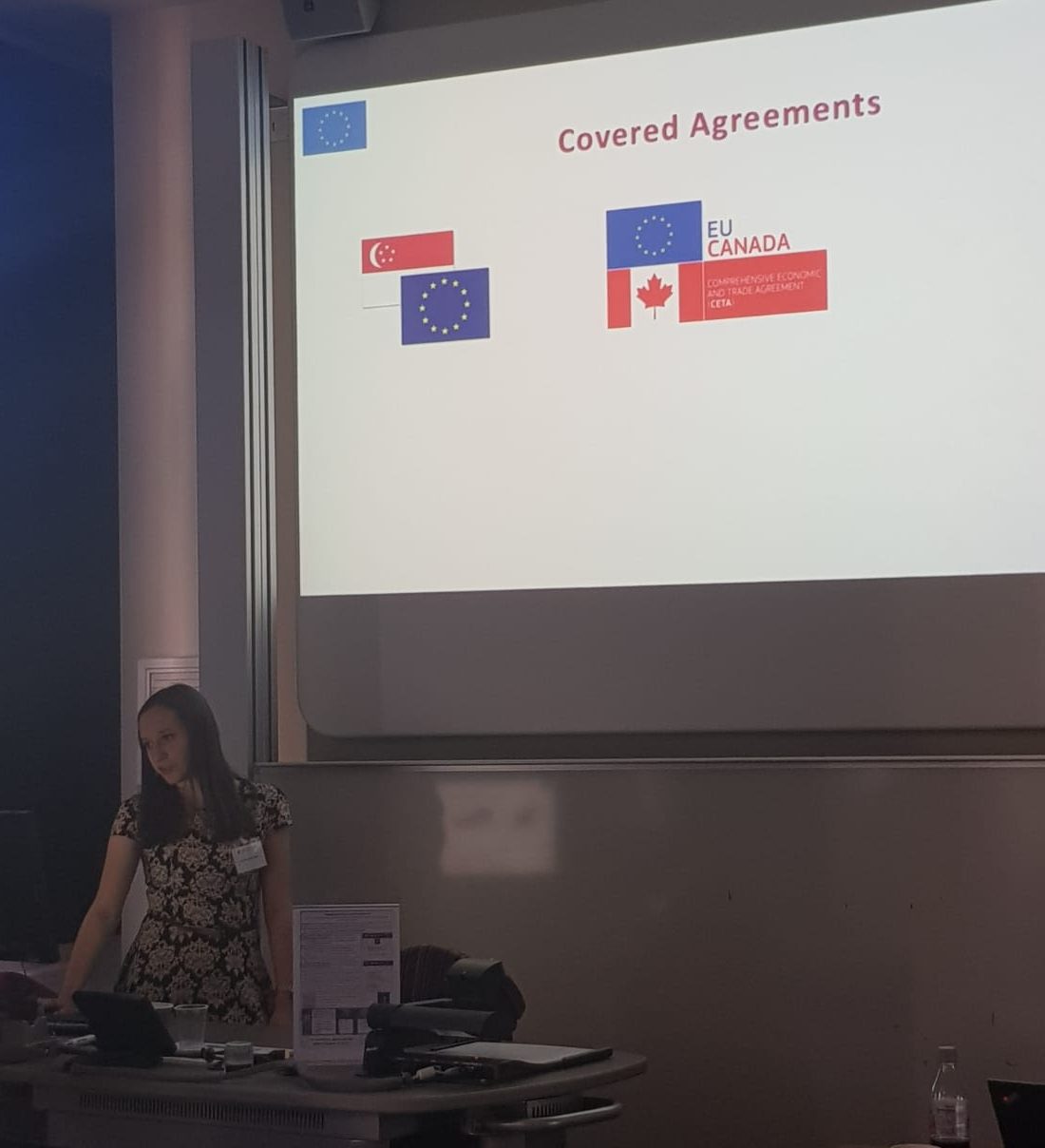 She presented a paper on the choice-of-forum clauses contained in the third generation European Union Free Trade Agreements (EU FTAs). The paper analyses whether the World Trade Organization (WTO) panels and the Appellate Body (AB) could give effect to these clauses in case a dispute is first brought to the EU FTAs Dispute Settlement Mechanisms (DSMs) and afterwards a parallel or subsequent dispute is commenced within the WTO DSM. It identifies several conditions which the choice-of-forum clauses from the EU FTAs need to respect in order for the WTO panels and the AB to give them effect. The paper also provides recommendations on how the clauses could be better drafted so that they achieve their aim. 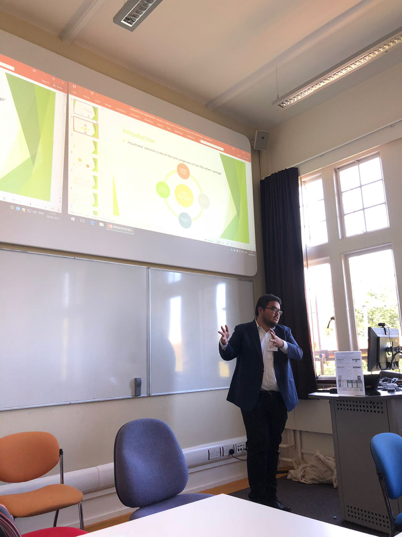 He presented a working paper on the reform of adjudicator selection processes in international investment disputes by taking an institutional design perspective. He discussed the problems with current appointment mechanisms, the consequent biases created among adjudicators and the need for a common framework for improved institutional design that goes beyond doctrinal legal research. 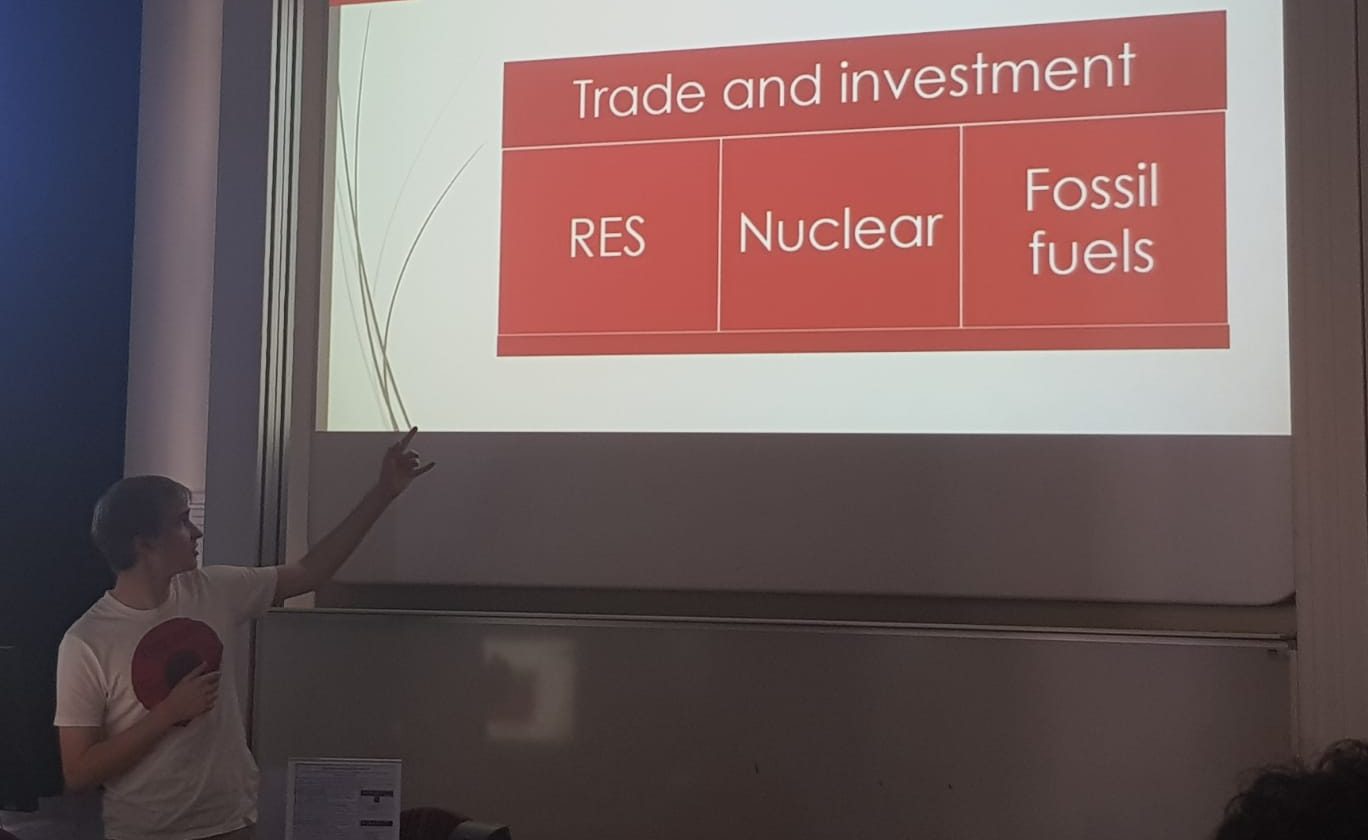 The presentation assessed the disrupting potential of renewable energy sources on European Union (EU) energy security. It also aimed at analysing how it might redefine the EU position in energy geopolitics vis-à-vis the EU’s primary energy partners, considering the EU’s ambition to lower GHG (Greenhouse Gas) emissions by 80-95% by 2050 compared to 1990 levels. 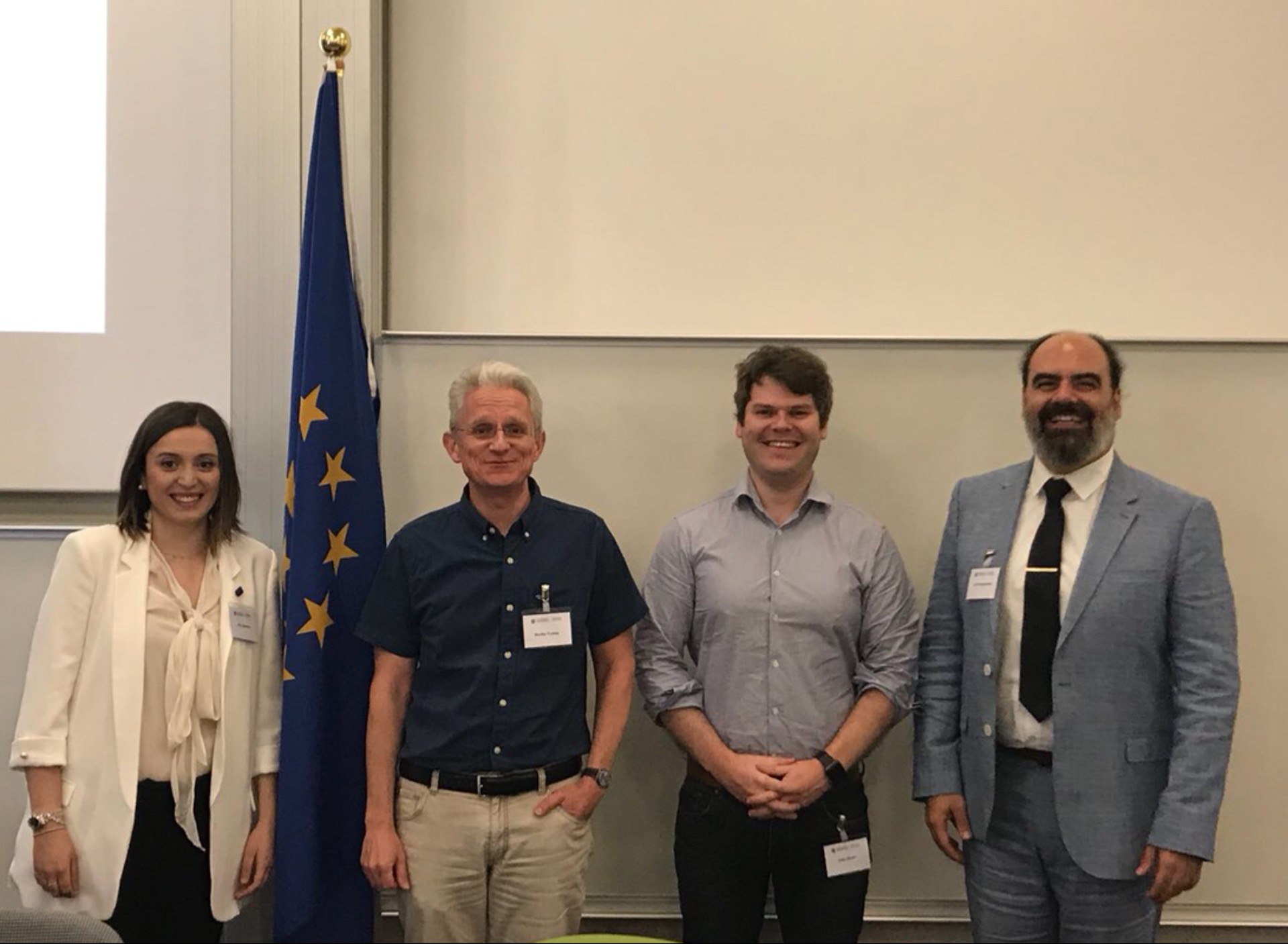 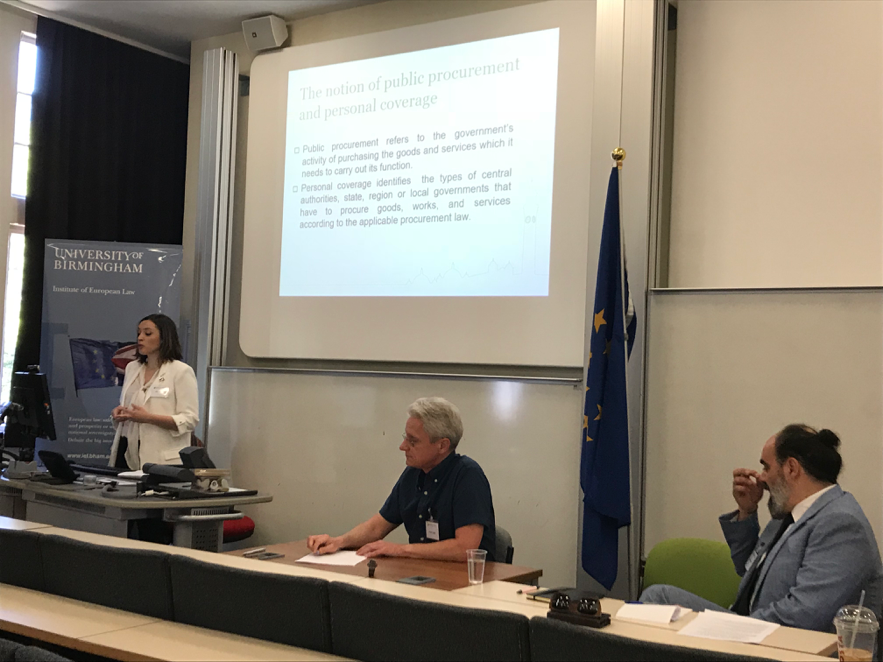 Her presentation aimed at analysing the controversial issue of personal coverage under the Transatlantic Trade and Investment Partnership (TTIP) and Comprehensive Economic and Trade Agreement (CETA) to further examine the main (constitutional) rationales behind the failure to conclude the TTIP and the successful negotiation of CETA. 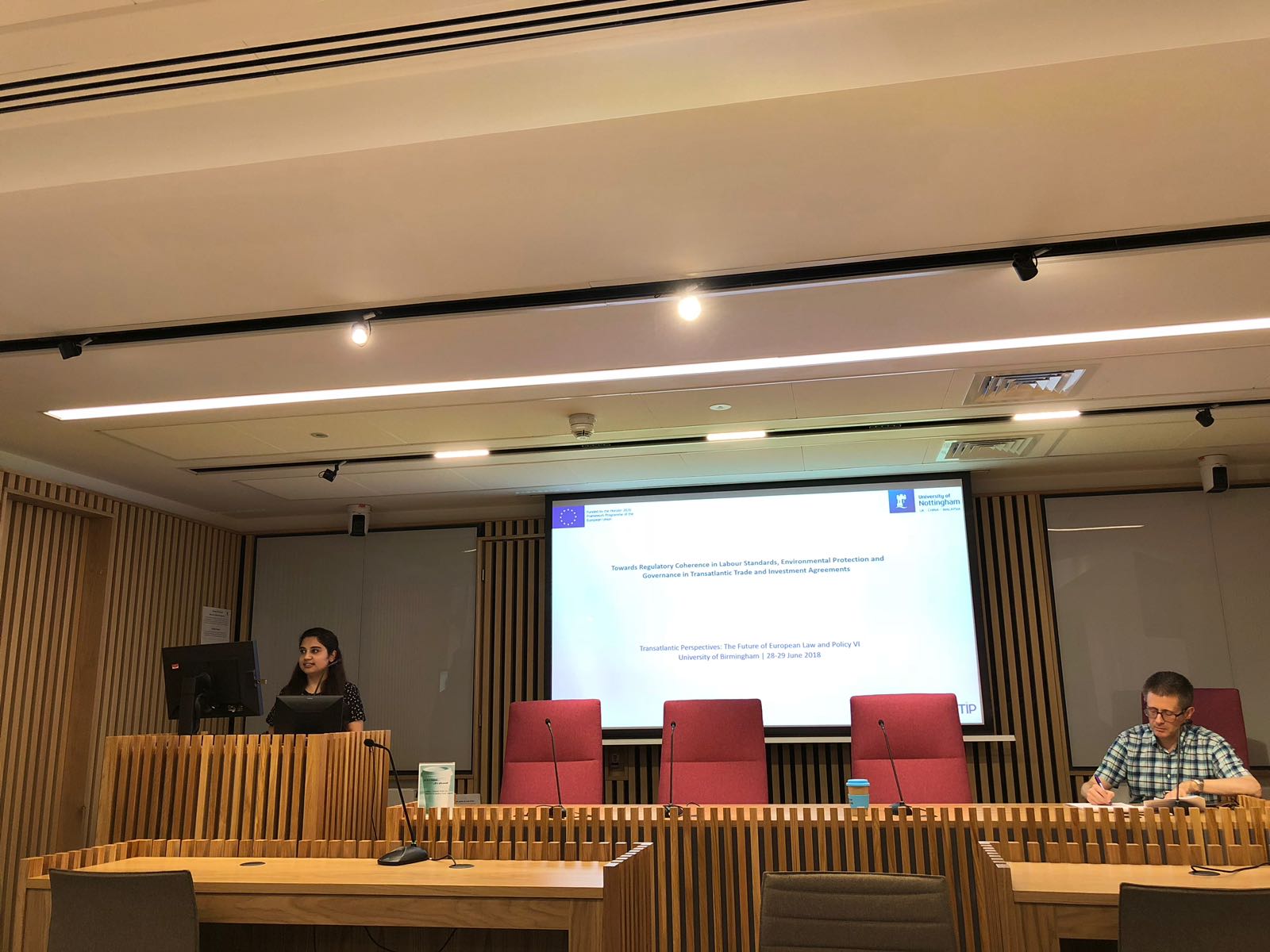 This presentation discussed the substantive, procedural and institutional provisions on labour and environment under the 2017 EU-Canada Comprehensive Economic and Trade Agreement and the envisaged EU-Mexico “new generation” Free Trade Agreements (FTAs). A comparison of the provisions was made with another non-EU FTA. Based on the comparison, it was argued that except the civil society mechanism (CSM), the provisions largely lack innovation that could provide an impetus to the enforcement of labour and environmental standards through FTAs. Further, weakness of the existing CSM mechanism were highlighted and recommendations to strengthen it were made. 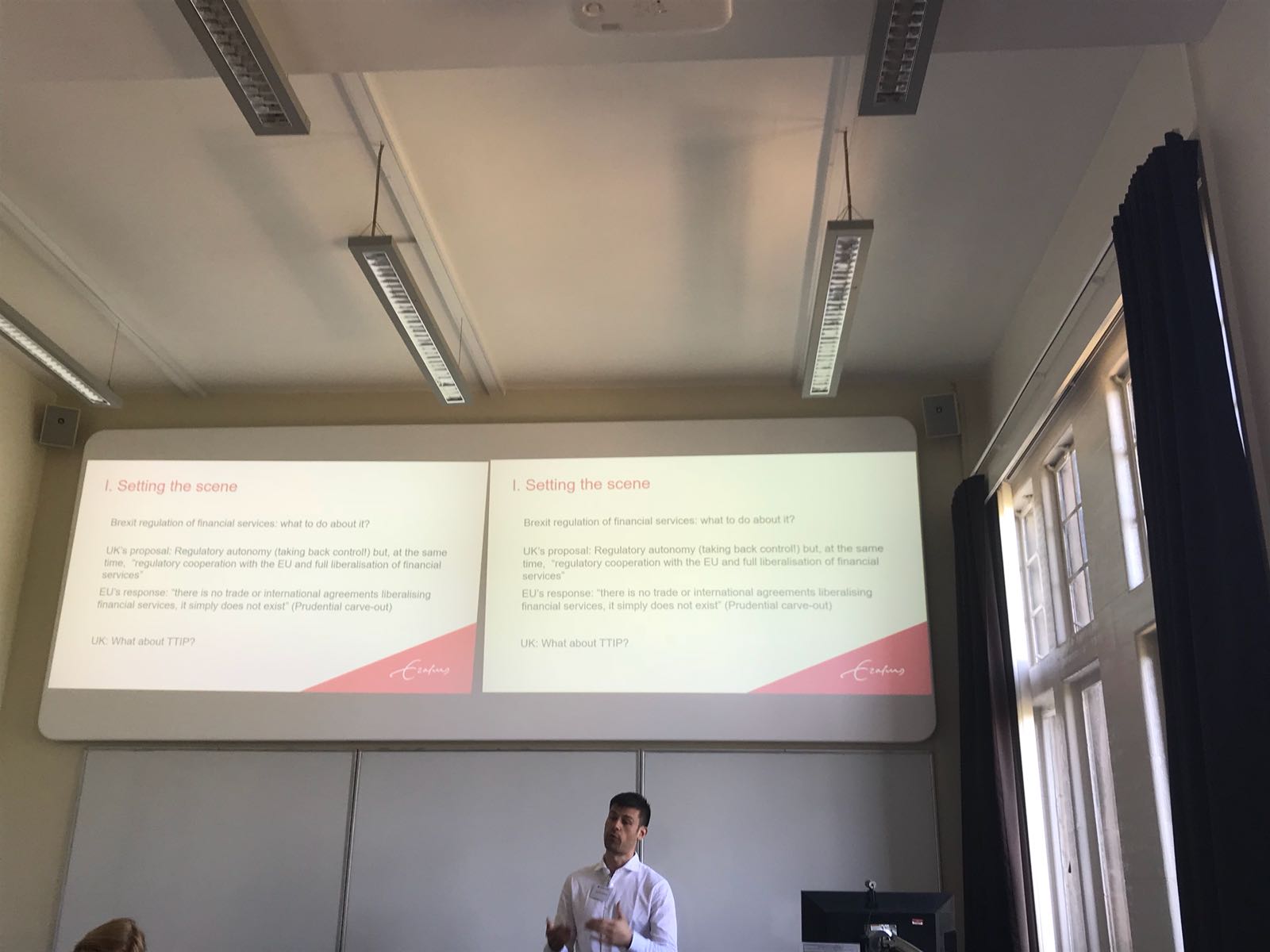 The departure of the United Kingdom (UK) from the European Union (EU) constitutes a major event for the global financial governance, and both financial firms and common citizens are wondering what will happen to the EU process of financial integration after Brexit. Although unsuccessful, the Transatlantic Trade and Investment Partnership (TTIP) agreement between the United States (US) and EU sought an advanced agreement on financial regulatory cooperation between two autonomous polities. His presentation highlights under which mechanisms TTIP could provide a template for the post-Brexit EU-UK relationship, regarding financial services.