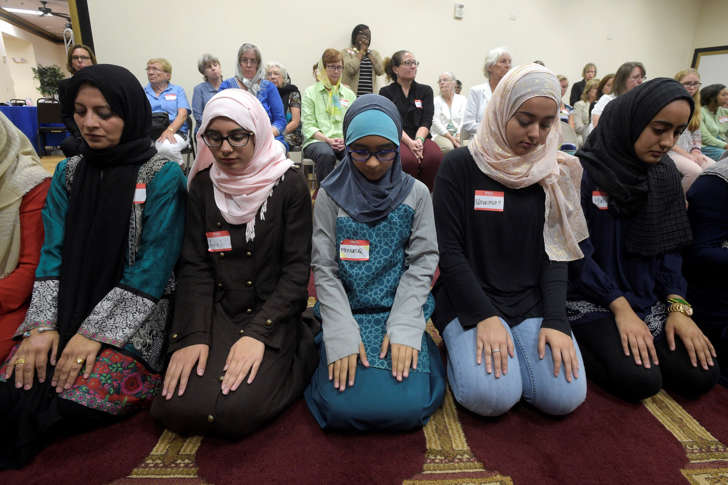 “They know what’s going on. They know that [Omar Mateen] was bad,” he said after the Orlando massacre. “They have to cooperate with law enforcement and turn in the people who they know are bad. … But you know what? They didn’t turn them in. And you know what? We had death and destruction.”

This is a common idea in the United States. It’s also a lie. First, Muslims like me can’t see into the hearts of other worshipers. (Do you know the hidden depths of everyone in yourcommunity?) Second, he’s also wrong that we don’t speak up when we’re able.

I know this firsthand: I was the one who told the FBI about Omar Mateen.

I met Omar for the first time in 2006 at an iftar meal at my brother-in-law’s house. As the women, including his mother and sisters, chatted in the living room, I sat with the men on the patio and got to know him and his father. Omar broke his Ramadan fast with a protein shake. He was quiet — then and always — and let his dad do the talking.

[Rep. Jim Himes: Why I walked out of the House’s moment of silence for Orlando.]

I’d seen them before at the oldest mosque in the area, the Islamic Center of Fort Pierce. We have a lot of immigrants in our community. They grew up in other countries, often with different sensibilities. A few don’t understand American culture, and they struggle to connect with their American-born or American-raised kids.

I came here from Pakistan in 1979 when I was 6 years old, grew up in Queens (like Omar) and Fort Lauderdale, went through the American education system, and assimilated well. So I was able to make better inroads with young people in our community, including that introverted teenager I met at the iftar. I tried to stay in touch with the younger generation, acting as a mentor when I could.

I saw Omar from time to time over the next decade, and we developed a relationship because most of the other Muslim kids in his age group went elsewhere for college, and he stayed behind. We mostly spoke over the phone or texted with one another a half-dozen times per year. We talked about the lack of social programs at the mosque, especially for teens and young adults like him. I often played pranks on him. Once, around 2009, I attached LED lights to the tires of his car, so when he drove the wheels glowed neon. He laughed when he figured it out a few days later.

Soon after Omar married and moved to his own home, he began to come to the mosque more often. Then he went on a religious trip to Saudi Arabia. There was nothing to indicate that he had a dark side, even when he and his first wife divorced.

But as news reports this week have made clear, Omar did have a dark outlook on life. Partly, he was upset at what he saw as racism in the United States – against Muslims and others. When he worked as a security guard at the St. Lucie County Courthouse, he told me visitors often made nasty or bigoted remarks to him about Islam. He overheard people saying ugly things about African Americans, too. Since Sept. 11, I’ve thought the only way to answer Islamophobia was to be polite and kind; the best way to counter all the negativity people were seeing on TV about Islam was by showing them the opposite. I urged Omar to volunteer and help people in need – Muslim or otherwise (charity is a pillar of Islam). He agreed, but was always very worked up about this injustice.

Then, during the summer of 2014, something traumatic happened for our community. A boy from our local mosque, Moner Mohammad Abu-Salha, was 22 when he became the first American-born suicide bomber, driving a truck full of explosives into a government office in Syria. He’d traveled there and joined a group affiliated with al-Qaeda, the previous year. We had all known Moner; he was jovial and easygoing, the opposite of Omar. According to a posthumous video released that summer, he had clearly self-radicalized – and had also done so by listening to the lectures of Anwar al-Awlaki, the charismatic Yemen-based imam who helped radicalize several Muslims, including the Fort Hood shooter. Everyone in the area was shocked and upset. We hate violence and were horrified that one of our number could have killed so many. (After an earlier training mission to Syria, he’d tried to recruit a few Florida friends to the cause. They told the FBI about him.)

Immediately after Moner’s attack, news reports said that American officials didn’t know anything about him; I read that they were looking for people to give them some background. So I called the FBI and offered to tell investigators a bit about the young man. It wasn’t much – we hadn’t been close – but I’m an American Muslim, and I wanted to do my part. I didn’t want another act like that to happen. I didn’t want more innocent people to die. Agents asked me if there were any other local kids who might resort to violence in the name of Islam. No names sprang to mind.

After my talk with the FBI, I spoke to people in the Islamic community, including Omar, abut Moner’s attack. I wondered how he could have radicalized. Both Omar and I attended the same mosque as Moner, and the imam never taught hate or radicalism. That’s when Omar told me he had been watching videos of Awlaki, too, which immediately raised red flags for me. He told me the videos were very powerful.

After speaking with Omar, I contacted the FBI again to let them know that Omar had been watching Awlaki’s tapes. He hadn’t committed any acts of violence and wasn’t planning any, as far as I knew. And I thought he probably wouldn’t, because he didn’t fit the profile: He already had a second wife and a son. But it was something agents should keep their eyes on. I never heard from them about Omar again, but apparently they did their job: They looked into him and, finding nothing to go on, they closed the file.

[Glenn Greenwald: The FBI was right not to arrest Omar Mateen before the shooting.]

Omar and I continued to have infrequent conversations over the next few years. I last saw him at a dinner at his father’s house in January. We talked about the presidential election and debated our views of the candidates that were running – he liked Hillary Clinton and I liked Bernie Sanders. This banter continued through texts and phone calls for several months. My last conversation with Omar was by phone in mid-May. He called me while he was at the beach with his son to tell me about a vacation he’d taken with his father to Orlando the previous weekend. He’d been impressed by the local mosque.

What happened next is well-known. We’re still in shock. We’re totally against what he did, and we feel the deepest sadness for the victims and their families. If you don’t agree with someone, you don’t have the right to kill them. We are taught to be kind to all of God’s creation. Islam is very strict about killing: Even in war – to say nothing of peace – you cannot harm women, children, the elderly, the sick, clergymen, or even plants. You can’t mutilate dead bodies. You can’t destroy buildings, especially churches or temples. You can’t force anyone to accept Islam. “If anyone slew one person, it would be as if he killed the whole of humanity,” says the Koran.

I had told the FBI about Omar because my community, and Muslims generally, have nothing to hide. I love this country, like most Muslims that I know. I don’t agree with every government policy (I think there’s too much money in politics, for instance), but I’m proud to be an American. I vote. I volunteer. I teach my children to treat all people kindly. Our families came here because it is full of opportunity – a place where getting a job is about what you know, not who you know. It’s a better country to raise children than someplace where the electricity is out for 18 hours a day, where politicians are totally corrupt, or where the leader is a dictator.

But there’s so much suspicion of Islam here. The local paper published an unsigned editorial called “Leave our peaceful Muslim neighbors alone,” and the comments were full of hateful lies – that the Boston bombers had visited the area, that the Sept. 11 bombers came from here, that we were a hotbed of violent ideology. None of this is true. Donald Trump didn’t create these attitudes, but he plays on them and amplifies them.

I am not the first American Muslim to report on someone; people who do that simply don’t like to announce themselves in to the media. For my part, I’m not looking for personal accolades. I’m just tired of negative rhetoric and ignorant comments about my faith. Trump’s assertions about our community – that we have the ability to help our country but have simply declined to do so – are tragic, ugly and wrong.

Speaking with host and Breitbart News Network’s Executive Chairman Stephen K. Bannon, Mr. Nuttall said: “I have a 5 year old son, and I worry that the century into which we’re heading now is going to be a violent century and the greatest threat to the globe isn’t going to be Russia, it’s going to be Islamic fundamentalism.

“If we’re going to cut this cancer out of our world we’re ALL going to have to come together – that includes ourselves, the Russians, the States, the Chinese, the Indians, and indeed some of the Muslim states as well because this is a threat – a greater threat actually, I think, than Nazi Germany ever was to the globe.”

“This is probably the greatest threat humankind has ever faced because these people are willing to die on behalf of their cause. They’re willing to give their own lives in the name of Mohammed and Allah, and we as a globe must come together and we must say ‘enough is enough’ and we must cut this cancer out and it must be done now.”

He added that he was sceptical of British Prime Minister David Cameron’s plans to support anti-Assad forces in Syria.

“I want to see a plan, I want to see what a post-ISIS Syria will look like… will we be handing over the keys of power to the Turkish-sponsored rebels… including the Al Nusra front, an Al Qaeda affiliate… [and groups] who are sponsored by the Muslim Brotherhood. Now let me just read to you the Muslim Brotherhood’s motto: ‘Allah is our objective, the prophet is our leader, the Quran is our law, jihad is our way, dying in the way of Allah is our highest hope’.”

“Now should we really be supporting people whose motto is this? I don’t believe we should”.