Depending on who is telling the story, Daoud Muradyan, a blind 21-year-old, is either a potential terrorist or a harmless immigrant who embodies everything that is wrong with France’s broad new antiterrorism powers.

Mr. Muradyan came under suspicion after having contact with a radical imam, the French authorities say. They also say that he recently traveled to a part of Brussels where several of the attackers in the Nov. 13 Paris assaults had lived, and that he had five cellphones and four USB memory sticks in his possession when the police raided his home in the southeastern city of Avignon.

But Mr. Muradyan, who converted to Islam and moved to France from Armenia in 2007, says he just likes to buy electronics and travel a bit. “The policemen were very mean when they came in, very mean and scornful,” he said, recounting the search of his home. “They broke everything.”

He is now one of hundreds of French Muslims who have been placed under house arrest under the state of emergency declared by President Francois Hollande after the Paris attacks the Islamic State. He must tap his way to a police station three times a day to check in with the authorities.

Muslim groups point to Mr. Muradyan’s case as an example of government overreach as over the last year France has become a laboratory for balancing security concerns with civil liberties. At the very least, his case shows the quandary facing the authorities as they work to head off another terrorist attack, but risk further alienating French Muslims.

The emergency powers now in effect allow the police to conduct raids of homes, businesses, associations and places of worship without judicial review and at any time. The police can place people under house arrest even if they do not have sufficient evidence of wrongdoing to detain or charge them.

Critics of the new emergency security powers say the human cost of such warrantless searches, about 3,300 of which have been conducted since the Paris attacks, has been disproportionate to their efficacy. Less than 1 percent of raids have resulted in new terrorism investigations, the Interior Ministry acknowledges. Many people whose homes have been searched, like Mr. Muradyan, complain that their privacy was invaded, their families frightened and their property damaged.

Beyond the emergency powers, Mr. Hollande’s government has already pushed through an expansion of surveillance laws. It is now lobbying for a raft of constitutional changes, including provisions that would allow some convicted terrorists to be stripped of their citizenship, a step that has raised fierce debate and protest from even members of his Socialist Party.

The French Parliament voted on Tuesday to extend the state of emergency for another three months. Marc Trévidic, a judge who oversaw terrorism cases for 10 years, emphasized the dangers for France if it failed to strike the proper balance. During his tenure, he said, he listened to many wiretapped phone conversations of young people considering whether to follow a more extreme form of Islam.

“They have the impression that France doesn’t like Islam,” Mr. Trévidic said, adding that those young people often have not yet taken the step of becoming active in a terrorist organization because they have jobs, families and a stake in society. As the number of warrantless searches rises in the weeks after the attacks, scores of French citizens posted photographs and videos on social media websites showing the damage to their front doors, their furniture and their possessions. The damage stung all the more for those who did not have the money for the repairs.

In one widely reported case, police officers burst into a halal restaurant where families were eating dinner and ordered them to put their hands on the table, but did not check their identity papers. They searched mosques as well as a shelter for battered and homeless Muslim women. Often it was unclear why the police were conducting the raid. Amnesty International reported this month that many people caught up in the raids said in interviews that they feared the searches were often based on little more than unsubstantiated suspicions passed along by neighbors.

The authorities have also put 407 people under house arrest since Nov. 14, requiring them to report to the police three times daily, which forced those who were working to quit their jobs or take leaves of absence.

Prime Minister Manuel Valls defended the raids, detentions and house arrests during a Feb. 5 session of the National Assembly, saying that they were “efficacious” and “indispensable to the security of the French people.”

Mr. Valls said the emergency powers had enabled the government to uncover at least one attack in the planning stage. However, it was unclear how far along it was and whether it involved a conspiracy engineered by a larger extremist group such as the Islamic State or Al-Qaeda. The available evidence suggests that, at most, a handful of potential extremist assailants have been found as a result of the emergency measures.

In only 10 percent of the searches did the government open new judicial proceedings. Of those, just 28 were related to terrorism, with the vast majority — 23 — for the crime of “apologizing for terrorism,” or “praising terrorism.” In many cases, such an act in the United States would be protected as free speech.

That means just five cases involved potential terrorism offenses such as preparing to travel to the Middle East for training or gathering information for a potential attack.

As for the 407 house arrests related to terrorism, the government effectively has admitted it was mistaken in at least 41 cases and has lifted those house-arrest orders. Another 27 were related to the climate conference, and the house arrests were lifted when the conference ended.

Two individuals have also been freed by order of the Conseil d’Etat, the highest administrative court, on the grounds that the government failed to prove its case. At least 108 cases are being appealed. In the course of 3,289 raids on homes, mosques and associations, the police netted 560 weapons. The interior minister, Bernard Cazeneuve, said on Feb. 9 that 42 of them were “heavy weapons” such as semiautomatic guns, while more than half were either shotguns or handguns.

“Today what has happened is that every Muslim is seen as a potential terrorist,” said Mohamed Bajrafil, the imam of a congregation of more than 3,000 in Ivry-sur-Seine on the outskirts of Paris.

“It really has to stop. One could say, that Daesh has won because its goal has been to sow trouble, and they have succeeded,” he said, using an Arabic acronym for the Islamic State, which is also known as ISIS or ISIL.

Those on the receiving end of the raids say they feel as if the state is conducting a witch hunt in which their property is damaged, their dignity disregarded and their families humiliated. Many have asked why the heavily armed police officers needed to break doors and furniture when no one was resisting them, but it has been difficult to get the government to respond, several Muslim groups said.

Malik Nekaa, a lawyer in Lyon, who has many Muslim clients, said he believed that Muslims felt rejected in France in part because of the way the police have behaved: casting a wide net and often explaining little about why they were searching or what they were looking for.

He said the police had brought 100 officers to a small hotel near Lyon that had been rumored to have been hosting a meeting of Turkish Muslims — it turned out later that it had not been. The raid terrified people in the neighborhood, but most of all, it struck local Muslims as a sign that they could be next, he said. “It made people afraid,” he said, “because they saw that the government was not capable of distinguishing who is dangerous and who is not.”

Months after the “Charlie Hebdo” attacks, questions remain about Europe’s Islamic communities. How strong is the lure of groups like al-Qaeda and ISIS for Islamic youth in France or the UK? Why do so many Muslims, including those born and raised in affluent European states, feel disconnected from their societies? Georgetown’s Jocylene Cesari and University of Michigan’s Juan Cole take a nuanced look at these misunderstood communities.

A former General Information official, considered to be one of the principal specialists on Islam in France, Bernard Godard was invited to discuss his new book The Muslim Question in France. During the interview he discusses how Islam is practiced by the generations born in France, the difficulties of the French Council of the Muslim Religion, as well as the development of the Salafist movement, Islamophobia, and the Interior Minister’s recent initiative to create a “dialogue forum” between the government and the representatives of Islam.

Akhenaton, singer and member of the band IAM, released his fifth solo album in November entitled Je suis en vie. The singer has been known for his anti-racism advocacy. In his song Etrangs fruits, a tribute to the “protest song” by Billie Holiday, Strange Fruit, the singer denounces, “zemmourification,” a reference to the polemicist who has used the media to create controversy. The rapper discussed the state of French society and the “fear of Islam.”

“Islam, a subject which is absolutely not taught.” Does France have a problem with Islam? “France is Islamophobic,” said Akhenaton: “Islamo-phobe= someone who is fearful of Islam.” For the IAM singer, this fear dates back to the 9/11 attacks in the United States.

But for the rapper, the response has not been equal to the level of fear. Akhenaton calls out teaching curricula. “Do you think that our universities know the subject of Islam well? The same ones who teach history today?” he asked before adding, “it’s a subject that is absolutely not taught, while 7 million of our fellow citizens” are concerned.

Jacques Attail, former Special Advisor to Francois Mitterrand, believes that today, in France it is “more difficult to be Muslim than Jewish, because France has not yet helped to break the glass ceiling for an entire generation.” How does one explain this? “Jews have been in France for longer. For a community to integrate itself it must create a middle class, a bourgeoisie…Islam of France does not yet have all this.”

From PBS: “Join best-selling author/adventurer Bruce Feiler on an epic journey as he travels with contemporary pilgrims on six historic pilgrimages around the world and explores how these sacred landscapes and revitalized routes are reshaping faith.”

See a preview of Sacred Journeys.

It is an uphill struggle for the Muslim community to build a place of worship in Milan, many hoped it would ready for Expo 2015, instead the building has been delayed. According to Paolo Branca, advocate and Associate Professor at the Catholic University of Milan, the real problem, rather than the opposition of some in the Conservative Party, is the divisions within the Muslim community, split into two major areas of thought: Caim (Coordination of Islamic associations in Milan) which has never made ​​a secret of being close to the Muslim Brotherhood and Coreis (Islamic Religious Community), which is more secular and supported by the Diocese. “Many have advanced their concerns, not the mosque, but on its future management in the case that it incorporates close ties to the Brotherhood” explains Branca “ This could complicate the creation of a place open to all Muslims as well as Milanese.” 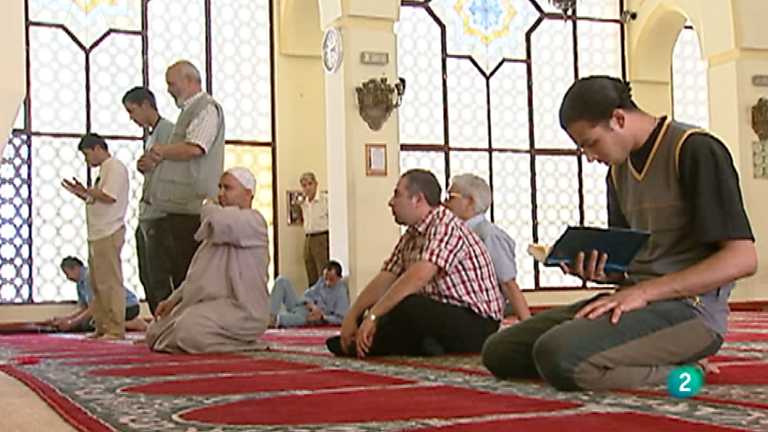 A video portraying how the Ramadan is lived in Spain; Muslim leaders and others share their thoughts on all aspects from the sacred month: fasting; weather circumstances; integration and the meaning of the celebration.